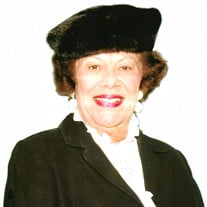 Ms. Addie Z. Strong, had her homecoming on July 21, 2020 at the age of 95 years. She was born in Snow Hill, North Carolina, or “Brownstown”. She was the youngest of 10 brothers and sisters, all of whom preceded her in death, Ruby Speed, Esther Topping, Velma Smith, Vertie Rodgers, and Dora Grant; as well as her brothers, Graham, Andrew, Dock, and Frank James. She’s survived by her only son, Cornelius Willingham (Michelle) of Huntersville; NC, and grandchildren Gordon and Grant, as well as two nieces and nephews who were particularly close, Deborah Howze, Barbara Higgins, Buddy Topping and Johnny Topping. Also surviving are nephews Henry and George Grant, and Hattie Williams, plus a host of great nieces and nephews. Special thanks to Ruby Ward and Doris Topping her faithful care givers. A teacher in the Inkster Public School system for 35 years, she administered several Federal Programs as a special education reading specialist. A graduate of Winston Salem State, she started her teaching career in Fredericksburg, VA, before moving to New York, then Detroit. She did graduate work at William & Mary College, Marygrove College, and Madonna College, teaching at the latter two, and ultimately received her Masters of Education from Eastern Michigan University. She also completed all of the class work needed for her PhD. A Trustee of Tabernacle Missionary Baptist Church, in Detroit, MI for more than 50 years, she’s been President or Director of more than 50 organizations, holding positions as diverse as the Board of the Boy’s Clubs of Metro Detroit, Chaplain Extern for Grace Hospital, Boards of Detroit’s International Institute and YWCA of Wayne County, and appointed Chairperson by the Governor of the Keep Michigan Beautiful Committee. A Life Member of the NAACP, she’s attended Detroit’s annual Banquet for more than 30 years, and has even graced the front page of the Detroit Free Press as an attendee. Her fraternal affiliations include Lambda Kappa Mu, The Red Hat Society, Marraci Temple’s Order of the Eastern Star, Golden Circle, and Daughters of Isis. She was the Golden Circle’s State President (Lower Lady Ruler) Michigan Grand Assembly. She was also Daughters of Isis Chairperson, and Worthy Matron, of the Eastern Star. The funeral arrangements are to be determined, however she will be interned at Woodlawn Cemetery in Detroit, Michigan. Arrangements are being made by James Funeral Home, Huntersville, NC, and Swanson of Detroit, MI.

The family of Addie Strong created this Life Tributes page to make it easy to share your memories.

Send flowers to the Strong family.