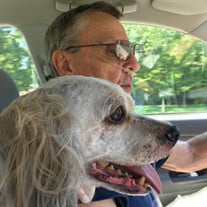 Alan John Gregory, age 72, went to the Lord peacefully on January 15, 2021, after a long illness. At his side throughout was his loving wife, Rosalind Gregory. He is survived by his brother and sister-in-law Paul Gregory and Janet Gregory of Lafayette Hill PA, his children Andrew (Jennifer) Gregory of Bedford NH, Tina (Mike) McFarland of Asheville NC, Jaime (Bradley) Thomas of Bentonville AR, and Jillian (Jason) Baptiste of Los Cruces NM. Alan was also a loving step-father and step-grandfather to John Trautner (and Ashley Stotz, his friend) and Tammy Trautner and combined 6 grandchildren and 3 great-grandchildren, whom he cared for alongside Rosalind. His adoring grandchildren Marley, Eric, Allysun, Ellie, Ayden, Autumn, James, Alexander, and Abigail will all keep a part of him forever. Many other relatives, friends, and colleagues will also remember him for who he was - a loyal friend, a perpetual thinker, and an authority on a myriad of subjects. Alan was born in London, England in 1948 and emigrated to America with his family in the 1950s. Alan attended Penn State University and met Arlene Gregory (nee Rothstein) of Philadelphia, whom he married and had his children with. After college he served in the US Air Force and was training in aircraft maintenance. The family moved to Palm Beach Gardens, FL where he worked as an Aerospace Engineer at Pratt & Whitney for over 20 years. During his time at Pratt, Alan met many close friends and was highly regarded for his work with NASA on the Space Shuttle Main Engine program. Following this, he worked for the TSA as a screener at both West Palm Beach and Charlotte airport. Alan was able to figure out how anything worked and could be improved, and it was this ability that guided his career and life. He would help anyone and was never short on advice or suggestions. He was a great thinker, a reliable person, and most importantly a great father and husband. He will be cremated and live on in our hearts and minds, reunited with his parents and his beloved dog Benji. A virtual remembrance will be held at 7pm EST Thursday, January 21, 2020 using Google Meet. This code will be active at that time using meet.google.com/stp-wevw-kyg. Rest in peace, Alan.

Alan John Gregory, age 72, went to the Lord peacefully on January 15, 2021, after a long illness. At his side throughout was his loving wife, Rosalind Gregory. He is survived by his brother and sister-in-law Paul Gregory and Janet Gregory... View Obituary & Service Information

The family of Alan Gregory created this Life Tributes page to make it easy to share your memories.

Send flowers to the Gregory family.