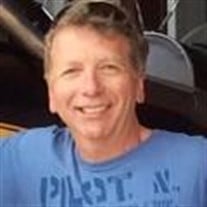 FINAL CHECKRIDE Do not look at my grave and cry. I’m not there, I’m up in the sky. I’ve passed my final checkride. And now I’m free to fly. To places I’ve only dreamed of, while flying mortals through the sky. Do not grieve for me, for I’m free to fly. Do not grieve for me, for I did not die. I just joined the flying club in the sky. Alexander Henry Becker, age 63, of Cornelius, NC died July 13, 2021 at his home. He was employed by the Federal Aviation Administration (FAA), and retired after 27 years of service. During his tenure, he excelled into a supervisory role in the TRACON, where he supervised those who interpreted radar traffic to control aircraft. Upon retirement, Alex was recruited by PSA Airlines, and after months of exhaustive training, he became a First Officer. After a year and upon completion of even more strenuous training, he reached the rank of Captain. A truly remarkable feat and an amazing “retirement job.” A job well done, Captain Becker! His love of aviation began as a child and Alex was flying by the age of 15. He then became a line boy at a FBO (now called Buffalo Air Field), where he received a $50 tip from F. Lee Bailey, after washing his plane, in 1974. Alex was a lifetime member of the Experimental Aircraft Association (EAA), an international organization of aviation enthusiasts based in Oshkosh, WI. It is the largest aviation gathering of its kind in the world. He was also active in the local EAA Chapter 309, in Charlotte, NC. He owned Experimental Aircraft which he built and he assisted with many other building projects. Alex was always willing to lend a helping hand! His kindness, compassion, and willingness to help anyone at anytime will be remembered and cherished by many! To most the sky is the limit, to Alex it is home. He is survived by his wife, Joanne Morley Becker, his brother Robert Michael Becker and his wife Kathy Becker. He is also survived by his furry kids, Jessie, Bella and Chloe. In lieu of flowers, donations accepted in the form of prayers only, please. All services will be private. James Funeral Home of Huntersville is serving the family.

The family of Alexander "Alex" Becker created this Life Tributes page to make it easy to share your memories.

Send flowers to the Becker family.