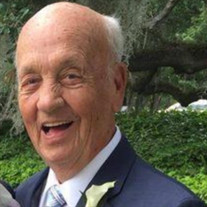 Allen Roy “Big Al” Tolbert passed away peacefully in his sleep on Friday, May 21, 2021, with family by his side. Born near Lenoir, NC on April 1, 1927 to the late Edgar Henry and Claudia Williams Tolbert, Allen attended Oak Hill School where he won numerous debating contests. He joined the United States Marine Corps immediately upon graduation, and was stationed at Camp Pendleton California at the end of WWII. He continued his military service in the Marine Reserves until 1964. Upon Allen’s Honorable Discharge from the Marines, he attended Clevenger Business School in Lenoir, where he pursued his loved for accounting and then opened his own bookkeeping service for small businesses. The lure of the big city pulled him, and he moved to Charlotte in 1952. This led him to employment with Terrell Machine Company on South Blvd, where he served in increasing roles of responsibility for 40 years until his retirement in 1992. A life-changing event took place in Allen’s life on a Saturday in 1953, when his brother Paul invited him to have lunch with his wife’s family in Blowing Rock the next day. Allen hesitated as he wanted to rest on Sunday, but Paul’s wife Mary pulled out a picture of her beautiful sister Willa, and Allen changed his mind immediately. This began a love affair which resulted in Holy Matrimony on December 22, 1954, and to the end he always called Willa “my brown-eyed beauty”. He kept that first picture he saw of her in his wallet for the entire 66 years of their marriage. Allen was a faithful member of University Hills Baptist Church (formerly Enderly Park Baptist) where he served in numerous leadership roles, including teaching Sunday School, serving as a Deacon, and as Church Treasurer. A Godly husband, father, grandfather, brother, and uncle, Allen loved nothing more than spending time with family and friends, usually over a good meal (always ice cream for dessert!). He also enjoyed spending Saturdays at the farm where he grew up, “The Old Place,” riding his tractor moving dirt around and sharing stories with his brothers, cousins, and nephews. Allen is survived by his loving wife of 66 years, Willa. He is also survived by his daughter Pam Hall (husband Dana) of Harrisburg, his son Gary (wife Teri) of Raleigh, his grandson Brooks (wife Anna) of Winter Garden FL, and a special nephew Kevin Tolbert (wife Cathy) of Hickory. He is also survived by too many nieces and nephews to name, all of whom he loved with all his heart. In addition to his parents, Allen was predeceased by brothers Leonard, Maynard, Gene, Paul, sister Lois Ward, and special cousin Ernest. A Celebration of Life will be held on Tuesday, May 25, at University Hills Baptist Church, 1500 Suther Road, Charlotte. Visitation will begin at noon with the Celebration to follow at 1:00, officiated by Rev. Bo Riley and Dr. Mike Toney. Burial will be private. In lieu of flowers, memorials may be made to University Hills Baptist Church (Foreign Missions Fund), 1500 Suther Road, Charlotte NC, 28213 or to Hospice and Palliative Care Lake Norman, 705 Griffith St. Suite 203, Davidson, NC 28036. Arrangements are in the care of James Funeral Home of Huntersville. Online condolences can be shared jamesfuneralhomeLKN.com.

Allen Roy &#8220;Big Al&#8221; Tolbert passed away peacefully in his sleep on Friday, May 21, 2021, with family by his side. Born near Lenoir, NC on April 1, 1927 to the late Edgar Henry and Claudia Williams Tolbert, Allen attended Oak Hill... View Obituary & Service Information

The family of Allen Tolbert created this Life Tributes page to make it easy to share your memories.

Send flowers to the Tolbert family.