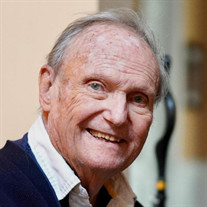 Mr. Andrew Jackson III, 90 of Huntesrville, passed away Thursday, December 30, 2021. Andrew was known as Andy to his friends, Jack to his family and Dad to his children. Andy was Born in Baltimore, MD on January 24, 1931. He served in the Army National Guard, United States Navy and US Coast Guard. Andy was educated at the US Coast Guard Academy, MIT and Johns Hopkins University. He was a civil engineer known for designing the Skyway Bridge in Chicago. Andy was Director of Engineering for the North Carolina State Ports Authority, He was an engineer for Bethlehem Steel and FEMA both while residing in Cherry Hill, NJ. He was an avid sailor being a member of both the Riverton Yacht Club and Brant Beach Yacht Club. He was a talented photographer having several articles published on the subject. He loved animals of all kinds but especially dogs. His family was the central priority of his life. He was a member of Hopewell Presbyterian Church. He was predeceased by his mother, Margaret Regina Pindell, his father, Andrew Jackson Jr. Two sisters Celeste Hould and Katherine Koetzle and two brothers Daniel and Harvey. He is survived by his wife of 62 years, Nancy Kaufholz, their children; Jon Drew Jackson and his wife Mabry Ann of Conway, SC, James Gregory Jackson and his wife Poly of Mooresville NC and Andrea Leigh Barei and her husband Tom of Denver NC, grandchildren; Ian, Taylor, Austin, Graham, Kelsey and Jackson. Memorial service will be held 2:00 p.m. Tuesday, January 11 at Hopewell Presbyterian Church 10500 Beatities Ford Rd. Huntersville NC 28078. In lieu of flowers, memorial contributions may be made to Redemption Counseling, 2668 Hwy 378 Conway SC 29528 Findredemption.com or Levine Dickson Hospice House of Huntersville NC. James Funeral Home is assisting the family. Online condolences at www.jamesfuneralhomelkn.com.

Mr. Andrew Jackson III, 90 of Huntesrville, passed away Thursday, December 30, 2021. Andrew was known as Andy to his friends, Jack to his family and Dad to his children. Andy was Born in Baltimore, MD on January 24, 1931. He served in the... View Obituary & Service Information

The family of Andrew Jackson III created this Life Tributes page to make it easy to share your memories.

Send flowers to the Jackson family.