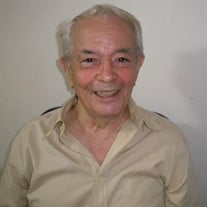 “Papi” as he was known to his loved ones and “Tony” to his friends, was born in Vega Alta, Puerto Rico to Flora and Leoncio Rodriguez. He was married twice, widowed, and fathered ten children. Though his humble beginnings did not permit him to get a formal education he was self-motivated and held many interesting jobs, including, driving a taxi in Puerto Rico, loading munitions onto US Warships harbored in Puerto Rico during WW2, teaching himself how to drive a semi-truck and drove a military transport carrying soldiers into town from the military bases, assembling light fixtures and chandeliers at a light fixture company in NY to retiring as the shipping clerk for the same company. As a teenager, he worked as an apprentice to a pharmacist, and learned enough chemistry that he was able to engineer, produce, bottle and sell his ‘hair gel’ in “bodegas” in Brooklyn, NY. “Papi” truly enjoyed life and always found a way to make a celebration of any gathering. He loved to be with family and friends. He had a great sense of humor, and it took little effort to make him laugh. Sometimes, while driving him back and forth from the facility, he and Daisy would get into giggling fits over any silly thing that either of them had said, and it would last the entire trip. His sense of humor was truly unlimited, for example, while sitting on the lobby couch at James Funeral Home, during a family funeral service that he attended, he commented that “this was a really nice place,” at that time we responded “I’m glad you like it because you will most likely end up here;” he agreed and laughed so much that we got concerned that the other guests would be disturbed. Yes, he loved partying, wine, and beer, sometimes a little too much, but he never showed up empty-handed. He had a known reputation as a ‘ladies’ man’, constantly complementing any woman he met; the nurses and caretakers where he lived soon were calling him “Papi” and learned that when he called them “Linda”, he wasn’t calling them by the wrong name, but calling them ‘pretty or sweetheart’, which is a Spanish term of endearment. He was blessed with excellent health and passed-away, three weeks prior to his 99th birthday without having suffered any major diseases, hospitalizations or even being on any subscription medications! I’m sure he is in Heaven right now, having a great time with old relatives and friends! We will miss you Papi and hope that you are having a great time in heaven. The memorial service will be held on Thursday, January 20, 11:00 AM at James Funeral Home. James Funeral Home, of Huntersville, is serving the family and obituary lovingly written by the family.

&#8220;Papi&#8221; as he was known to his loved ones and &#8220;Tony&#8221; to his friends, was born in Vega Alta, Puerto Rico to Flora and Leoncio Rodriguez. He was married twice, widowed, and fathered ten children. Though his humble beginnings... View Obituary & Service Information

The family of Antonio Vazquez created this Life Tributes page to make it easy to share your memories.

“Papi” as he was known to his loved ones and “Tony” to his friends,...

Send flowers to the Vazquez family.