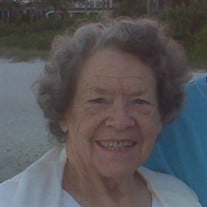 Audrey Della Jensen Young died on November 21, 2021 at age of 101. She was preceded in death by her beloved husband, Charles (Charlie) Young and her son, Derk Young. She is survived by three children - April Young (Bob Kelly), Bruce Young (Cindy) and Laura Clark (Joseph); three grandchildren - Faith Haynes, Rob Kelly (Meg Weckstein) and Chas Young ( Lien); and one great grandson, Charles Haynes. Audrey was born on July 7, 1920, in Tabiona, Utah, to Kenneth Jensen and Leah Townsend Jensen, the youngest of three daughters. She attended local schools, and remembered fondly riding the family pony, Peanuts, to school with her sisters. Peanuts was famous for waiting patiently for his passengers in order to take them home. She finished high school in Park City, Utah, then moved to La Crescenta, Calif., where she attended Glendale Junior College and explored her interest in acting and directing at the famous Pasadena Playhouse. At the beginning of WWII, she joined the many women who went to work in jobs traditionally reserved for men and served as a matron in the Los Angeles County jail. When a female prisoner managed to commit suicide on her watch, the sheriff suggested she was in some danger and she left California for her sister’s ranch in Washington. There she found work in the employment office at the Lockheed factory, later famous as the home of the atomic bomb that effectively ended the war with Japan. Later, Audrey would recall that the staff was never told what was being manufactured at the plant, but remembered that there were numerous regular visits of officials and senior military officers. Like most Americans, her first knowledge of the bomb being manufactured at her plant was reading about it in the newspaper after its explosion. While in Washington, she met a handsome Navy pilot named Charles Young. They were married on July 27, 1945, at the home of her aunt, Laura MacDonald in La Crescenta, Calif. Once Charlie was released from active duty, they lived in Logan, Utah, where Charlie enrolled at Utah State University, and their first child - daughter April - was born. After graduation, Charlie enrolled in a Masters program at Purdue University in West Lafayette, Ind., and the family began what was to become a lifetime residence in the east. Son, Bruce was born in Indiana, just before Charlie graduated and accepted a position at Cornell Aeronautical Laboratory in Buffalo, NY. The family found a home in the small town of East Aurora. A second son (Derk) and a second daughter (Laura) were born there, and Audrey’s family was complete. While Charlie settled into his career, Audrey managed the family home and began to explore her own interests beyond wife and mother. She earned a real estate license, and once her children were in their teens, pursued a successful career as a real estate agent, selling, as Charlie once said, her friends’ homes to other friends. But her passion was always theater and she became an active member of the Aurora Players, acting in and directing many plays and events. She was a founding member of the Aurora Children’s Theater, writing, directing, and occasionally staring in plays for children. Her favorite role was the Scarecrow in Wizard of Oz and her family treasures the pictures of that role to this day. She was also active as a Methodist Youth leader and helped create variety shows and dramas for the youth to perform. She received many awards for her activities in both adult and children’s community theater and only gave up those activities when Charlie’s career took them away from East Aurora. The family moved to Dayton, Ohio, in 1971, and to Fort Walton Beach, Fla. in 1982 where Audrey discovered her love for gardening and landscaping. She joined the local garden club and set off on a project to improve the appearance of some highways. Her proudest achievement was winning a large grant from the Federal Highway Administration to landscape a popular route from Eglin Air Force base to the City of Niceville. She spent many hours planting, watering and otherwise tending this new strip of landscape. Fort Walton Beach also marked the beginning of much more frequent traveling. Audrey had always loved travel and she and her children had made many trips to visit family and friends around the US but she had always longed to see the rest of the world. She visited much of Europe, and then struck out for more unusual places, including South America, China and Africa. The family would like to express their thanks to the staff at The Haven Memory Care in Pineville, N.C., and also Hospice and Palliative Care for their kind, compassionate care of Audrey in her last years. We would also like to thank Vickie Goddard for her companionship and support. Among her many activities, Audrey found much pleasure in supporting a number of charities committed to the needs of others. She was committed to the work of the America Leprosy Mission, a 100-year-old ministry devoted to eliminating leprosy and other tropical diseases. In lieu of flowers, donations may be sent to ALM in her memory. A celebration of Audrey’s life is planned for January 22, 11:00 am at Van Wyck Presbyterian Church. James Funeral Home of Huntersville is serving the family.

Audrey Della Jensen Young died on November 21, 2021 at age of 101. She was preceded in death by her beloved husband, Charles (Charlie) Young and her son, Derk Young. She is survived by three children - April Young (Bob Kelly), Bruce Young... View Obituary & Service Information

The family of Audrey Young created this Life Tributes page to make it easy to share your memories.

Send flowers to the Young family.