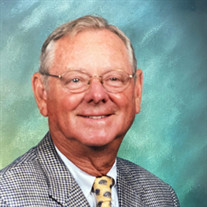 Benjamin Thomas Vernon, Jr. 90, of Charlotte left us gracefully from his home on July 27, 2020 after a long and rich life. He was born on September 26, 1929 in Winston-Salem to the late Benjamin Thomas and Doris Martin Vernon. From “Big Tom” he inherited his gentle, positive nature and from “Big Doris”, his servant’s heart. Ben spent his childhood attending the Moravian Church in Winston Salem and graduated from Reynolds High School in 1946. At the age of 16, he entered Davidson College graduating in 1950. Through his mother, he was instilled with the value of a solid education. This belief in the power of education was continually impressed on his children and grandchildren. After Davidson, he met his first wife, Mary Jane and began their family. It was at this time that he launched his career in the investment business. After a brief time in Rocky Mount, NC, Ben settled in Charlotte, living in the community for most of his adult life. During his career as an institutional and retail investment advisor, he both mentored and served in leadership of many boards and commissions. Covenant Presbyterian became his spiritual home in Charlotte, where he devoted much of his time as an Elder, Sunday School Teacher and in multiple other capacities as well as being a close personal friend to many ministers over the decades of his life in the church. After Mary Jane passed away in 1981, he met beloved Linda and they started a life at Lake Norman where they lived for 30 years. Ben and Linda enjoyed lakeside living in a beautiful setting with glorious sunrises and ever blooming gardens. From this home, they entertained family and friends with generous, gracious hospitality. Also, during this time, Ben and Linda travelled extensively and went on many unique, educational journeys. Anyone who knew Ben was aware of his two passions beyond his family and friends: Davidson College Golf and his work in rural Stokes County. A lifelong golfer, his love of the game was solidified playing for the Davidson Golf Team. His continuous, never ceasing support of the golf team at Davidson has transformed the program in the years since he was a student athlete. He was The Consummate Wildcat. Through the Apple Foundation, Ben proudly supported nonprofits in Stokes and Rockingham counties. This foundation was multi faceted and touched all aspects of life in the region, particularly serving education and outreach initiatives for those who were most at risk. Notably, Ben became a champion of the Stokes County Arts Council in their efforts to create The Arts Place of Stokes, a multi purpose cultural arts venue that provides arts programming and support for the area’s residents. Ben – called a mentor by many – was truly a gentle man, filled with optimism and compassion. He leaves a legacy of humble and faithful servanthood as well as a belief in the transformative value of education. He was a lifelong learner and voracious reader. These are qualities he has modeled for his children and grandchildren. He will be long remembered and missed by many. Survivors include his wife Linda Vernon; son, Benjamin Thomas Vernon, III of Jacksonville, FL; daughter, Ann Vernon Stanley (Chip) of Charlotte; stepson, Jack Thomas (Donna) of Candler, NC; his six grandchildren Ben Vernon, Catherine Vernon, Thomas and Mason Stanley and Riley and Sean Thomas as well as two great-grandchildren. He was predeceased by his first wife, Mary Jane McGee Vernon and his son, Cary McGee Vernon. In lieu of flowers, memorials may be made to the Stokes County Arts Council, PO Box 66 Danbury, NC 27016 or The Residents’ Assistance Fund at Sharon Towers, 5100 Sharon Rd. Charlotte, NC 28210. A private family service will be held at 11:30 AM on Friday July 31st at Covenant Presbyterian Church. The service will be live streamed. There will be a link on the homepage of the Covenant Presbyterian Church website. https://www.covenantpresby.org/live James Funeral Home of Huntersville is serving the family. www.jamesfuneralhomeLKN.com

Benjamin Thomas Vernon, Jr. 90, of Charlotte left us gracefully from his home on July 27, 2020 after a long and rich life. He was born on September 26, 1929 in Winston-Salem to the late Benjamin Thomas and Doris Martin Vernon. From &#8220;Big... View Obituary & Service Information

The family of Benjamin Vernon created this Life Tributes page to make it easy to share your memories.

Send flowers to the Vernon family.