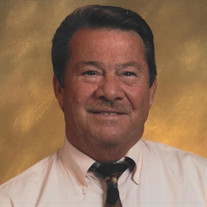 Billy Ray Newsome, 73, of Huntersville, passed away on Sunday, October 11, 2020. He was born on January 8, 1947, in Wayne County, North Carolina, to the late Edward and Margaret Newsome. He prospered as a very successful businessman owning Victory Products & Rentals as well as Shop Towel Rentals for over 40 years. Growing up in Eastern North Carolina, he went from working the tobacco fields at a very young age to becoming an avid Athlete in many sports where he held the State High Jump Record in Track. He served his country in the U. S. Army Reserves and his community as President of the Mecklenburg County Crime Prevention for over a decade where he became affectionately known as "MR FED UP". Like his mother his love of gardening was admired by all that knew him; he always had that Green Thumb. He was a man of so many talents that were such a blessing to us all. To name a few he could: Draw, Sketch, Paint, Sing, Teach, Cook and the list goes on. Billy sang and travelled with the Charles B Aycock-Falconnaires & Falconnettes and later in life with the Charlotte Philharmonic. His greatest passion was his service to God through singing, teaching, and serving as Youth Minister and Choir Director at Hunter Acres Baptist Church for many years. In addition to his parents, Billy is predeceased by his brother, Monroe Newsome; and grandchild, Jacob Warfield. Billy is survived by his wife of 23 years, Delly Newsome; daughters, Sherry Murphy (Jonathan) and Christy Elgin (Billy); stepdaughter, Jamie Fisher (Zach); brother, John Newsome (Marilyn); grandchildren, Joseph, Kylie, Claire,Nate, Sarah, John, MacKenzie, Alyssa, and Ethan; many nieces, nephews, and cousins; and his Aunt who treated him just like her own son, Myrtie Sauls. The memorial service will be held on Thursday, October 15, 12:00 PM, at Hunter Acres Baptist Church in Charlotte, NC. The visitation will be one hour prior to the service from 11:00-12:00 PM. In lieu of flowers, memorials may be made to Hunters Acres Baptist Church in Charlotte, NC. James Funeral Home, of Huntersville, is serving the family.

Billy Ray Newsome, 73, of Huntersville, passed away on Sunday, October 11, 2020. He was born on January 8, 1947, in Wayne County, North Carolina, to the late Edward and Margaret Newsome. He prospered as a very successful businessman owning... View Obituary & Service Information

The family of Billy Newsome created this Life Tributes page to make it easy to share your memories.

Billy Ray Newsome, 73, of Huntersville, passed away on Sunday,...

Send flowers to the Newsome family.