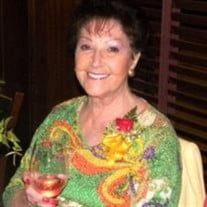 Carolyn Sue Thompson Young, age 90, passed away Friday, April 29, 2022 at Atrium Huntersville Oaks after several years of declining health. Carolyn was born on September 6, 1931 in Hendersonville, NC to the late Paul Thompson Sr. and Eunice Nelson Thompson. She was one of ten children and the oldest girl in the family. Her family moved to Charlotte when Carolyn was a young girl and lived in the Berryhill community. The family eventually moved to what is now the Mountain Island area of Charlotte. Carolyn was a proud graduate of Paw Creek High School Class of 1949 and attended business classes after high school. She married Edwin Thomas Young Sr. in 1950 and in 1956 they moved to their longtime home in the same Mountain Island area where she grew up. Carolyn was office manager for her father's business - Paul Thompson Furniture Repair, and in 1966 began working at NCNB as an executive secretary. After she left the bank, she started a 40+ year career as an independent travel agent planning vacations and group trips for many, many people. As a travel agent, she was able to travel all over the world and many times on her own. Carolyn was a long time member of Cook's Memorial Presbyterian Church where she served as a ruling elder, deacon, Sunday School teacher, youth leader, circle leader and other roles. Through the years, she served as a scout leader, PTA president, Coulwood garden club member and canasta card club member. Carolyn was preceded in death by her parents, her husband, by her brothers, Paul Thompson, Jr., Oliver Thompson, Marvin Thompson, Curtis Thompson and Emmett (Butch) Thompson, by sister-in-laws; Bobbie, Joan and Melva Thompson. She was also preceded by long time friend Frances Keziah Sheppard Hair. Mrs. Young is survived by her children: Ed Young Jr. (Janis), Denise Young Vead (Mike), Betsy Young Boone (Paul), grandchildren; Allie Young Utz (Bradley), Abby Young Liu (Bo), Connor Vead (Tamara), Kaley Vead (Nathan Wright), great-grandchildren; Ellerbie, Gaines and Banks Utz and Brooklyn Vead. A third great-granddaughter will be arriving in July. She is also survived by her siblings; Norman Thompson, Charles Thompson (Ella), Vera Thompson Smith (Jim), Deanna Thompson Jones (Stan), sister-in-laws; Terry Thompson and Nancy Thompson; and many nieces, nephews and cousins. She also leaves high school best friend, Sue Keever Cooley; and her 'Fab 4 Sisters' - Judy 'JJ' Jones, Shirley Little Murray and Jo Kelly. A Celebration of Carolyn's life will be held at 2:00pm on Tuesday, May 3rd at Cook's Memorial Presbyterian Church. The family will receive friends in the church Fellowship Hall following the service. Visitation will be Monday, May 2nd from 6 to 8 pm at James Funeral Home, Huntersville, NC. Memorials can be made to Cook's Memorial Presbyterian Church, 3413 Mt. Holly-Huntersville Rd, Charlotte, NC 28214 or to Hospice & Palliative Care of Cabarrus County. The family would like to express their extreme gratitude to the staff at Atrium - Huntersville Oaks for the care they have provided Carolyn over the last several years. "Carolyn has traveled the world over and has seen sights many of us could only have dreamed. She's been from the North Pole to the South Pole, from Bali to the Berlin Wall, Japan, Australia, China, Egypt, Greenland, Bora Bora to name a few. She’s traveled every continent even going on a 6-week cruise from England to Cape Town. But early on the morning of Friday, April 29, 2022, she saw her most amazing sight - the gates of Heaven. It has been a struggle for her the past several years. While we will miss her dearly, we are sure she is rejoicing in her greatest and final destination." James Funeral Home is assisting the family. Online condolences may be made at www.jamesfuneralhomelkn.com.

The family of Carolyn Young created this Life Tributes page to make it easy to share your memories.

Send flowers to the Young family.