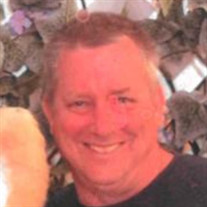 Christopher "Chris" Robert Goode passed away Sunday, November 8, 2020. He was born April 4, 1970 to Marsha Derberry and the late Terry Goode. In addition to his father, Chris is predeceased by his grandfather, Billy Greer; grandparents, Henry and Virgie Goode; and his much loved aunt, Delane Greer Edwards. Chris has many survivors whom he loved dearly: son, Christopher Goode, Jr.; daughter, Megan Elizabeth Goode; mother and stepfather Marsha and Clyde Derberry; grandmother, Joyce Greer; stepmother, Jan Goode; sister, Amber Goode; nephew, Damian; brother, Logan Derberry (Alexandra); grandson, Justin Goode and his mother Jennifer; granddaughter, Addyson Tutterow and her mother, Nanny DeAnna and Addyson's siblings, Justice, Michael, Jr, Rakeem, and Destiny; his good friend and golfing partner, Mike also known as Frog; and his best friend who helped him stay happy, Beverly McLaughin. There will be a celebration of life service at a later date. Chris had several working experiences over his lifetime, but the last two brought him the most happiness because of the trust and friendships made there. They are Beverlys Fine Foods and Powers Great American Midways. He was also proud to have served in the North Carolina National Guards 1454th Transportation Company when they deployed to Saudia Arabia in November of 1990. Chris was a loving, smart, and kind man who had many bumps in the road throughout life, but he kept on trucking on with music, AM talk radio shows, funny and mostly crude jokes fueling his way. As most of us do, he tried to keep his eye on the future while enjoying his life, friends, family, and especially his grandchildren. Rest in peace, Chris.

Christopher "Chris" Robert Goode passed away Sunday, November 8, 2020. He was born April 4, 1970 to Marsha Derberry and the late Terry Goode. In addition to his father, Chris is predeceased by his grandfather, Billy Greer; grandparents, Henry... View Obituary & Service Information

The family of Christopher Goode created this Life Tributes page to make it easy to share your memories.

Send flowers to the Goode family.