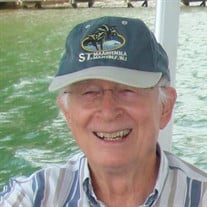 Not sure what to send?

C. Garren Tate, Jr., 86 of Cornelius, passed away peacefully at The Pines in Davidson on May 4, 2022 after a long illness. Garren was born in Concord on October 16, 1935 to Lillie Belle Turner Tate and C. Garren Tate. He graduated from Concord High School in 1954, where he served as the student body vice president, Key Club president and was president and trumpet player in the Concord Spiders Marching Band. After high school, he earned a B.S. in Civil Engineering and joined Sigma Phi Epsilon fraternity at N.C. State University. Garren later served in the field artillery of the U.S. Army at Fort Sill, Oklahoma. He returned to Charlotte in the early 1960s and was a licensed professional engineer and partner at Ralph Whitehead and Associates. Eventually he joined his father as vice president of the family business, C.G. Tate Construction Co., in Concord. C. G. Tate Construction Co. built many roads throughout the Southeast during Garren’s 30-year career, including various sections of I-85, I-40, US 221, 321, 421, 521 and US 211. Garren and his wife, Joan, also enjoyed volunteering in the community and were charter members of the Lake Norman Power Squadron, a safe boating organization where he served as an instructor and enjoyed many social events with his boating friends. He also enjoyed building sets for the Davidson Community Players, as well as designing and building piers and home projects, always with a “measure twice and cut once” philosophy. In 1972, Garren built a small “Pizza Hut” roof house on Lake Norman and welcomed family and friends for many fun get-togethers and cookouts over the years, complete with boating, water skiing instruction, sailing, Trivial Pursuit games, and a political debate or two. His sweet tea making skills and December 23rd HamFests were legendary, as was his skillful use of pliers to remove the bone in the ham after cooking. There was nothing he enjoyed more than family dinners by the lake. Garren is survived by his wife of 52 years, Joan Stass Tate, along with his daughter, Tammy Tate (Peter Hernandez), of Clemmons; daughter, Cara Tate (Tom Carruthers), of Weaverville; son, John G. Tate (Lori K. Tate), of Cornelius; grandchildren, David and Austin Chang, of Springfield, VA and Graydon and Margot Tate of Cornelius. He is also survived by sisters Ebba Jo Tate Spettel of Alexandria, VA; Martha Tate Cackowski (Bob) of Cornelius, Pat Hinson Neal of Sumter, SC, and many adoring nieces and nephews. He was preceded in death by his parents, Lillie Belle Turner Tate and C. Garren Tate, of Concord, and his sister, Phyllis Tate Benson, of Glastonbury, CT. The Tate family would like to thank the staff at The Pines and Hospice for the excellent care Garren received during his illness. There will be a graveside service at the mausoleum at Carolina Memorial Park in Concord on May 21 at 1 p.m. In lieu of flowers, memorials can be made to Hospice & Palliative Care of Cabarrus County or Lake Norman, Parkinson’s Association of the Carolinas or The Pines at Davidson. James Funeral Home is assisting the family. Online condolences may be made at www.jamesfuneralhomelkn.com.

C. Garren Tate, Jr., 86 of Cornelius, passed away peacefully at The Pines in Davidson on May 4, 2022 after a long illness. Garren was born in Concord on October 16, 1935 to Lillie Belle Turner Tate and C. Garren Tate. He graduated from Concord... View Obituary & Service Information

The family of Clarence "Garren" Tate Jr. created this Life Tributes page to make it easy to share your memories.