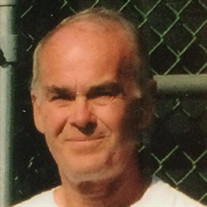 Clifton Bruce Ormsby of Cornelius, NC passed away July 1, 2021 at Novant Huntersville Medical Center in Huntersville, NC. He was born June 27, 1944 to Cecil Edward and Gladys Colborn Ormsby of Effingham, Illinois. Cliff’s education began in Effingham public schools and universities, culminating with his graduating Suma Cum Laude from UNC-Charlotte, with a BS in Biology. His professional career took a different path. He taught himself to write computer programs in three different languages and found success as a third party programmer with IBM. He eventually worked on his own, creating software for small companies, towns and private colleges. Cliff was an avid sportsman, with a special interest in golf, handball, tennis and fishing. He played baseball, while proudly serving as a member of the Weather Reconnaissance Squadron FOUR for the US Navy. He was awarded a National Defense Service Medal. Cliff is survived by his wife, Mary Helen Johnson Ormsby of Mooresville, NC; daughters Jennifer Ormsby (Mark Voerman) of Greensboro, NC; Amanda Ormsby (Patrick Piper) of Atlanta, Georgia; his brother, Edward Ormsby (Margaret) of Huntersville, NC; brother-in-law, Al Sayer of Indianapolis, Indiana, and a niece and several nephews. He was predeceased by his parents, his sister, Lusina Ormsby Sayre of Indianapolis, Indiana and stepsons Ronnie Allen and James David Monk. Cliff’s family is honoring his wish that there not be a funeral service. For anyone wishing to send a memorial, please make it to the church or charity of your choice. James Funeral Home, of Huntersville, is serving the family and obituary lovingly written by the family.

The family of Clifton Ormsby created this Life Tributes page to make it easy to share your memories.

Send flowers to the Ormsby family.