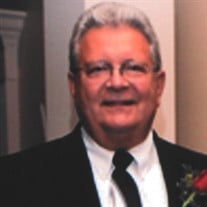 Craig Alan Kachline, 74, of Stanley, NC passed away on Saturday, June 19, 2021, at Levine & Dickson Hospice House at Aldersgate in Charlotte, NC. He enjoyed a long and productive life as a husband, father, brother, grandfather, brother-in-law and good friend. He was born in East Cleveland, OH and resided in Stanley, NC since 2003. Craig retired in 2000 from Dephi Automotive Systems division of General Motors as a manufacturing Supervisor at the Euclid Ohio Plant and as Purchasing Agent from Dephi Corporation Division of GM after 30 years of service. Craig was an Army Veteran serving in the 5th Battalion, 27th Artillery during the Vietnam War. He was preceded in death by his parents, John and Charlotte Kachline, brother, John, Jr. and sister Lynn Bachman. Survivors include his wife, Cynthia Kachline of Stanley, NC and his children Craig Kachline, Jr. and wife Kelly of Ohio, Cindy Bordelon and husband Mike of Ohio, Robert Kachline of Michigan; sister, Brenda Dennis and husband Danny of Iowa; grandchildren, Dylan Kachline, Anthony Velotta, Gabriel Bordelon, Jacob Bordelon, Wyatt Kachline and several nieces and nephews. Funeral services with Military Honors will be held Monday, July 19, 2021, at 10:00 AM at Salisbury National Cemetery in Salisbury, NC. Memorials and donations in Craig’s memory can be made to The Disabled American Veterans or Hospice and Palliative Care of Lincolnton County, NC. James Funeral Home of Huntersville, NC is serving the family of Craig and online condolences can be made to jamesfuneralhomelkn.com.

The family of Craig Alan Kachline created this Life Tributes page to make it easy to share your memories.

Craig Alan Kachline, 74, of Stanley, NC passed away on Saturday,...

Send flowers to the Kachline family.