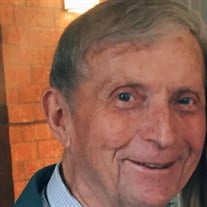 Curtis Buchanan, 87, of Huntersville North Carolina passed away on Saturday May 14, 2022 at the Levine Dickson Hospice House in Charlotte, NC. Curtis was born on May 16, 1934 in Jackson County NC. He was the son of the late Berlin Coleman and Pearl Dills Buchanan. Curtis was married to the love of his life Braxton Crocker Buchanan for 56 years. Braxton proceeded him in death on July 21, 2014. Survivors include their daughter Jeree Buchanan Current and husband David, two grandchildren Colby Current and Serena Current. Curtis is also survived by his brothers Julian Buchanan (wife Beverly) and James “Jim” Buchanan (wife Joyce). He is also survived by many loving cousins, nieces, nephews, and close friends. Curtis graduated from Western Carolina University, later earning his Master’s Degree from the same university. Curtis retired from the Charlotte Mecklenburg School System with 39 years of service. He was the principal of Thomasboro Elementary School from 1966 - 1993. Curtis won the National Distinguished Principal of the year in 1990. He served as the president of the North Carolina Association of Educators Division VI from 1991 - 1993. Curtis loved Southern Gospel music and sang for over 50 years with The Saint James Male Chorus and in his church choir. He treasured his church family and faithfully attended Trinity United Methodist Church in Charlotte NC. In 2019 Trinity honored Curtis with a Lifetime Achievement Award. Curtis became a member of the Long Creek Masonic Lodge #205 in 1962 serving as Master of the Lodge in 1969 and 2001. In 2010 he accepted the office of Chaplain serving in that capacity until 2017. In June 2021 Curtis was presented with the Chaplain of Distinction award in appreciation of his faithful service. Curtis was also a Shriner with the Oasis Temple and a member of the Scottish Rite. The family will receive friends on Thursday May 19, 2022 from 5pm - 7pm at James Funeral Home. A funeral will be held on Friday May 20, 2022 at 2pm at Trinity United Methodist Church with a viewing prior starting at 1pm. Rev. Jimmy Howard is officiating. Burial will follow at the church. Memorials can be made to Trinity United Methodist Church 6230 Beatties Ford Road Charlotte NC 28216.

Curtis Buchanan, 87, of Huntersville North Carolina passed away on Saturday May 14, 2022 at the Levine Dickson Hospice House in Charlotte, NC. Curtis was born on May 16, 1934 in Jackson County NC. He was the son of the late Berlin Coleman... View Obituary & Service Information

The family of Curtis Buchanan created this Life Tributes page to make it easy to share your memories.

Send flowers to the Buchanan family.