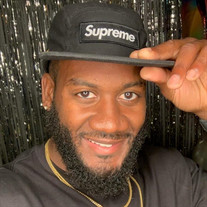 Huntersville- From the very moment he came into the world Darnell Mitchell Marshall did it his way – three weeks early breech and we almost lost both him and mom through complications. Yet Darnell defied the odds after having a collapsed lung – they said he would have asthma…but he didn’t, with his real bow legs they said he wouldn’t run but he did…his spirit and stubbornness didn’t accept couldn’t. And this was only the beginning…. Darnell Mitchell Marshall born November 29, 1989 to Wendolyn and James Marshall. He was a loving son, brother, grandson, father and faithful friend. Darnell was a standout and cut up wherever he went. Darnell loved to workout, clean his Bizcit, go to car shows, buy car parts especially those nice rims, loved his music loud with subwoofers that could deafen you. Darnell was meticulous in everything that he did – he strived for perfection and would be upset if it didn’t turn out right – but that never stopped him. Darnell was extremely smart and an extreme athlete – he tried boxing and gymnastics at one time – but excelled in basketball and especially football. He was so strong and fast that he begged to be on his brothers football team but was too young so mom did what she had to do so Darnell was old enough *wink wink* to join the team. But Darnell was so strong and rough that he knocked out kids 4 years older than he was – they wanted him off the team. And for us who watched him grow we saw him get bigger and stronger as he trained and conditioned his body. Every once in a while you could catch Darnell doing that standing back flip that would make you hold your breath waiting for him to land on his feet. Darnell was mature beyond his years, there was very little he couldn’t do. Not only did he get his college degree, Darnell was extremely artistic – he could draw anything (including the picture on the front cover), he was always doodling and there are lots of napkins, paper plates and scraps of paper with his artwork. Darnell was a wonderful young man, always encouraging, extremely focused, intentional and strategic…he bought his first home at the age of 24, father at age 27 and then he went on to get every car, motorcycle and sneaker he ever wanted. Darnell was able to live his life to the fullest in his 31 years on this earth. Darnell is survived by a large and loving blended family which includes fiancé Kenzi Deese, daughter Malia, Mothers – Wendolyn Diggs & Ashley Marshall, Fathers James Marshall and Scott Diggs, Brothers DeShaun and Daunte Marshall, Sisters Dakotah Diggs, Cheyenne and Chanaya Allard, Nephew Kingston Marshall, Grandmothers Virginia Edge, Katie Pena, Esther Marshall and Judith Diggs, Grandfathers James Edge and James Marshall Sr. , lots of Aunts and Uncles, brothers from other mothers, tons of cousins, and a host of other friends and family. The funeral service will be held at 2 pm Saturday, May 8 at James Funeral Home with burial following at Northlake Memorial Gardens. James Funeral Home is serving the family.

Huntersville- From the very moment he came into the world Darnell Mitchell Marshall did it his way &#8211; three weeks early breech and we almost lost both him and mom through complications. Yet Darnell defied the odds after having a collapsed... View Obituary & Service Information

The family of Darnell Mitchell Marshall created this Life Tributes page to make it easy to share your memories.

Huntersville- From the very moment he came into the world Darnell...

Send flowers to the Marshall family.