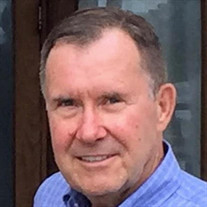 On Friday, September 24, 2021, David Thomas Bean, 70, of Huntersville NC passed away unexpectedly, but peacefully, at Cadence of Huntersville’s Assisted Living and Memory Care facility. David was born November 3, 1950 to Dr. C. Thomas and Jennie (Ernst) Bean in Niagara Falls NY. After earning his Master’s degree at Southern Methodist University in Dallas, Texas, he had a very full career in software sales, training, and accounts management for several international companies. He travelled widely on business and enjoyed living and working in France and India for periods of time later in his career. When David retired to Huntersville in 2014 he joined a running club and in the past few years proudly completed three half-marathons. David became a fabulous cook in his later years and loved visiting and cooking for his family. He will be well remembered for his ever cheerful manner, his sumptuous meals, his generosity, and his love for his family. David’s father preceded him death in 2007. He is survived by his mother, Jennie, of Jamestown NY, his sister Nancy (Dan) Callahan of Randolph NY, his four children: Cheri Bean (Tim) Finnegan of Port Charlotte FL, Christopher (Dana) Carpenter of Grindstone PA, Fernando Escaffi of Charlotte NC, and Jazmin Escaffi of Sterling VA, as well as several grandchildren, nephews and cousins. David’s ashes will be buried with his father in Winchester, Illinois at a later date. James Funeral Home is assisting the family. Online condolences at www.jamesfuneralhomelkn.com.

The family of David Thomas Bean created this Life Tributes page to make it easy to share your memories.

Send flowers to the Bean family.