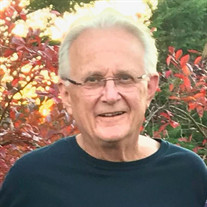 David Edward Mazurek, 78, of Huntersville NC passed away after a short illness on November 2, 2020. He was born on August 27th 1942 in Buffalo NY, to the late Edward and Julia Kasprzyk Mazurek. He is survived by his wife of 53 years, Arlene Iwanski Mazurek. Son Jason, daughter-in-law Kathy and granddaughter Logan Mazurek of Charlotte. Sister, Sylvia Mazurek Prusakowski of Phoenix, Arizona and late husband Donald Prusakowski and uncle to the late Christopher Prusakowski. David lived in Buffalo for over 50 years owning a hair salon where he formed many great relationships. David and his wife relocated to Huntersville, North Carolina where he continued his career as a talented stylist and enjoyed life with his wife Arlene while exploring new adventures and spending time with family. David was most happy when either playing or watching golf, passionate in his interest of automobiles (especially Corvettes and collector cars), landscaping and gardening, financial interests, and home improvements where he could design and fix almost anything. Dave was a loyal husband, father, grandfather, uncle and friend who was known for being easy going, having a great sense of humor and always enjoying life. In addition to his immediate family, he was also close with many family members and friends including his sister-in-law Phyllis Carlo, nephew Joseph Carlo (Kim), nieces Lena Carlo Carney (Ryan), and Julie Carlo. He was also close to and kept in touch with many relatives and friends in Buffalo, the Carolinas and Florida. At David’s request there will be no service. Instead, he asked that in lieu of flowers, donations may be made to the Arthritis Foundation https://www.arthritis.org/donate, which David and Arlene were actively involved. Donations may also be made to the NAEMT Foundation (National Association of Emergency Medical Technicians) www.naemt.org/about-naemt/naemt-foundation/donate as Dave adamantly requested during his short illness that he wanted to recognize these heroes for the work that they are doing. James Funeral Home of Huntersville is serving the family.

David Edward Mazurek, 78, of Huntersville NC passed away after a short illness on November 2, 2020. He was born on August 27th 1942 in Buffalo NY, to the late Edward and Julia Kasprzyk Mazurek. He is survived by his wife of 53 years, Arlene... View Obituary & Service Information

The family of David Mazurek created this Life Tributes page to make it easy to share your memories.

David Edward Mazurek, 78, of Huntersville NC passed away after...

Send flowers to the Mazurek family.