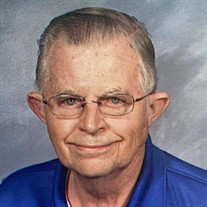 David G. Todd, 82, of Charlotte, passed away on Thursday, April 29, around 3 PM. He was a resident on the Olde Knox Commons in Huntersville. He was born to CM Todd, Sr. and Georgia Todd and raised in Charlotte. He worked is entire life at Alexander & Sons Grocery, where he was an excellent butcher. David could cook up one of the finest steaks on the top of a stove. He was proud to be a butcher and folks would wait in long lines for his steaks and burgers. David’s passion was gardening and raising some of the prettiest and most delicious tomatoes. When they started to die out in the late summer, you would always find a couple trays under his bed! David was a wonderful brother, more often he seemed like a daddy. There was nothing he would not do for his siblings as they were growing up. Other than gardening, he enjoyed washing and waxing his cars, riding the tractor and doing yard work and getting to listen to the races on the weekend. David never married or had a family of his own, but he had all of the neighborhood children as his family. David will always be remembered for his loyalty. His sister fondly remembers that he would always show up at 4:30 Tuesday to help her prepare her big family meal. They loved their Tuesday evenings together! David will be missed by his whole family but never forgotten. He was very special and simply stated-the best brother ever! David enjoyed being called to the Red Cross to donate his rare blood type. He had given gallons and gallons of blood and collected the pins they would give him. David was a member of Trinity U.M.C for his entire life. He is preceded in death by his siblings, Merle South, Charles Todd, Clyde M. Todd, Jr. “Buddy”, and Mary Jo Bostic. Survivors include sisters, Lois Todd Leckie and Julie Todd Foster and brother, Michael Todd. Memorials may be made to Trinity U.M.C. The graveside service will be held at 10 AM Tuesday, May 4 at Trinity U.M.C. Cemetery with Rev. Jimmy Howard officiating. The service will be live-streamed at https://www.facebook.com/JamesFuneralHome James Funeral Home of Huntersville is serving the family.

David G. Todd, 82, of Charlotte, passed away on Thursday, April 29, around 3 PM. He was a resident on the Olde Knox Commons in Huntersville. He was born to CM Todd, Sr. and Georgia Todd and raised in Charlotte. He worked is entire life at Alexander... View Obituary & Service Information

The family of David Gilbert Todd created this Life Tributes page to make it easy to share your memories.

Send flowers to the Todd family.