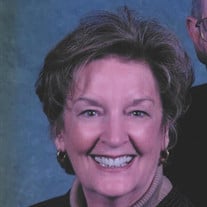 Our beloved Dee Chambers Driscoll, 83, of Davidson, lost her fight with Alzheimer’s and passed away on May 28, 2020. She was born in Man, WV to the late Burl Milford and Faye Rector Chambers. She is survived by her husband Timothy R. Driscoll, daughters, Jennifer Dee Driscoll and Susannah (Jeffrey) Driscoll Williams; son, Michael (Simone Jubyna) Driscoll; brother, Michael (Norma) B. Chambers; sisters, Marianna (Keith) Kidder and Belinda (Louis) Polk; and seven grandchildren. At an early age, Dee moved with her parents to their hometown, Ravenswood, WV, where she attended elementary and secondary schools. Following high school graduation as co-valedictorian, she attended Ohio University where she earned a Bachelor’s degree in Speech and Hearing Therapy. She then worked for the Marietta, Worthington, and Cincinnati, OH school systems before retiring to raise her children. Of the almost 61 years of married life, Dee and her husband lived 19 years in Wisconsin, 26 years in Tennessee, and short stints in Ohio, Alabama, and Georgia following her husband’s work assignments. They moved to Davidson in 2018 to be close to their daughter, Jennifer. The summer following college graduation, Dee had the opportunity to travel to Europe with three friends for six weeks including ocean voyages over and back on the original Queen Mary and Queen Elizabeth. She also enjoyed trips with special friends to such places as: Los Angeles, San Francisco, Seattle, Vancouver, Toronto, Montreal, New York City, and New Orleans. Summer family vacations to Kiawah Island, SC were enjoyed by all. Plans for a service are incomplete at this time. In lieu of flowers, memorials may be made to Hospice & Palliative Care Lake Norman, 705 Griffith Street Suite 203, Davidson, NC 28036. James Funeral Home of Huntersville, NC is serving the family.

Our beloved Dee Chambers Driscoll, 83, of Davidson, lost her fight with Alzheimer&#8217;s and passed away on May 28, 2020. She was born in Man, WV to the late Burl Milford and Faye Rector Chambers. She is survived by her husband Timothy R.... View Obituary & Service Information

The family of Dee Driscoll created this Life Tributes page to make it easy to share your memories.

Our beloved Dee Chambers Driscoll, 83, of Davidson, lost her...

Send flowers to the Driscoll family.