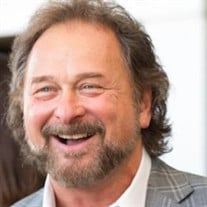 Dennis Franks, 68, beloved family man and American success story, passed away unexpectedly in Cornelius, North Carolina on October 16th, 2021. He is predeceased by his parents, Donald and Inge Franks. He is survived by his wife, Nancy; daughters, Lauren [Eddie] Ifft and Katie [Daniel] Rowland; grandchildren, Izzy, William and Cruz; and siblings Claudia Lambing and Donald Franks. From humble beginnings in Pittsburgh, PA-- the son of a steelworker and a German figure skating champion, Dennis achieved greatness. A graduate of Bethel Park High School, Dennis was recruited by more than 100 colleges to play football or pursue track and field. He accepted a football scholarship at the University of Michigan, where he majored in economics. Dennis started three years as an offensive center for the Wolverines and was awarded First Team All Big Ten and Second Team All American Honors in his senior year. He played 5 years in the NFL, first for the Philadelphia Eagles under the leadership of Dick Vermeil, then for the Detroit Lions. He captained the special teams and was named Most Valuable Player during his years in Philadelphia. He played a key role in setting the Eagles up for their first Superbowl appearance in 1981. Dennis finished his NFL career with the Detroit Lions where he helped build the Lions back to a playoff contender. Dennis married the love of his life, Nancy Haslett on March 20, 1982. Greensboro served as their primary residence during the years they raised Lauren and Katie. They now have three grandchildren Izzy, William and Cruz, who lovingly call them Diesel and Mia. Dennis’s success in life was fueled by his deep love for his family. For more than 30 years, after football, Dennis applied his infectious energy, team building talents and communication skills to mentoring and motivating entrepreneurs in 10 countries around the world. Alongside his wife, Nancy, Dennis has built multi-million-dollar businesses in business service centers, health and weight management consulting as well as network marketing. Since 1992, Dennis served as Executive Vice President of Market America/Shop.com, a global internet-based, product brokerage and one to one marketing company headquartered in Greensboro, North Carolina. He is part owner of Shop.com, an internet shopping site ranked in the top 100 online retailers worldwide. He has helped tens of thousands of entrepreneurs create their own path to financial freedom. He not only earned the respect of those he mentored and motivated, but he also earned their love. Dennis was also a talented musician. He was a guitarist and vocalist with the Greensboro-based Honey James Band. The band’s grand finale was performed to an enthusiastic crowd gathered for Market America/Shop.com International Convention in August 2021. He co-authored The Last Laugh: Vision to Victory with friend and fellow Philadelphia Eagle, Vince Papale. There they unpack the wisdom gained in sports, business and in life. The book’s title derives from a Hall of Fame photo, of Dennis and Vince as they have "the last laugh" celebrating the win that paved the way to Superbowl XV. The image depicts not only the emotion felt after winning a game, but the joy that comes from any accomplishment against the odds, in the face of naysayers and doubters. Dennis fought hard for everything he achieved. His larger than life personality inspired greatness in everyone he met. He leaves a huge void, but his beautiful legacy lives on through his family and the many lives he touched. In lieu of flowers the family asks that memorial contributions be made to the Dennis Franks Memorial Scholarship Fund - https://www.gofundme.com/f/dennis-franks-memorial-scholarship-fund There will be a Celebration of Life on November 7 at 2pm and live streamed on Facebook. Join the Service via Facebook Live! https://www.facebook.com/events/1519571791712115

Dennis Franks, 68, beloved family man and American success story, passed away unexpectedly in Cornelius, North Carolina on October 16th, 2021. He is predeceased by his parents, Donald and Inge Franks. He is survived by his wife, Nancy; daughters,... View Obituary & Service Information

The family of Dennis Franks created this Life Tributes page to make it easy to share your memories.

Send flowers to the Franks family.