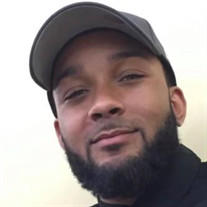 Devin McDowell Williams, age 26, of Huntersville, NC departed this life on Thursday, March 4, 2021 for his Eternal Home. He was born on a Sunday, Labor Day weekend September 4, 1994, in Evanston, Illinois to his father, Vernion Talmadge Williams, II and his mother, Dianna Langston Williams. Devin attended Huntersville Elementary School, Francis Bradley Middle School and Marie G. Davis Military & Global Leadership Academy. Upon early graduation from High School at MGLA he joined the Marines, and attended the Citadel Military Academy in Charleston, SC for a period after joining the Marine Corps. While in the Marine Corps he attained the rank of Sergeant before his honorable discharge. He later transferred to the Universal Technical Institute where he completed his studies in Mechanics, eventually becoming a Master Technician. Devin was a valued member, worker, and leader in his workplaces, and in every environment he found himself in. He loved working on cars, and driving them too, and trucks and motorcycles (anything with wheels and an engine), and had many interests and talents outside of that including music, solving Rubik’s Cubes, and being there for people in his life- whether he had known you for years, or just met you. A life-long learner, he was always studying something new, and could always tell you something you didn’t know. He especially enjoyed the challenge of taking things apart and then putting them back together, better than before. He was an authentic soul, and people were just drawn to him. In addition to his Parents mentioned above, Devin is survived by his son, Jaden Christopher Williams (Mother Jemea Woods); Sister, Kellie Williams; his Stepfather, Kenneth Strother; his Grandmother, Gladys Howard Pettiford (Joseph Pettiford, Sr); his 2 Stepsisters, Andrea Wolfe and Brittany Stone (Rob Schnabel); Uncles from both sides, Joseph Pettiford, Jr (Kimberly), Robert Pettiford(Antoinette), recently deceased; Addison Williams, Jr; Christian Williams; Daniel Williams; Eric “Gus” Williams; his lifelong friend and “Brother from another Mother,” Chase Eklund, and a large host of cousins and other relatives and friends from all over. He liked this poem by Lord Byron, When We Two Parted “When we two parted In silence and tears, Half broken-hearted To sever for years, Pale grew thy cheek and cold, Colder thy kiss; Truly that hour foretold Sorrow to this …” The funeral service will be held on Sunday, March 14, 2:00 PM, at James Funeral Home in Huntersville. The visitation will be held on Saturday, March 13, 6:00-8:00 PM, at the same location. Interment will be at St. Phillip Missionary Baptist Church Cemetery in Huntersville with military honors following the funeral. This obituary was lovingly written by his family. James Funeral Home, of Huntersville, is serving the family.

Devin McDowell Williams, age 26, of Huntersville, NC departed this life on Thursday, March 4, 2021 for his Eternal Home. He was born on a Sunday, Labor Day weekend September 4, 1994, in Evanston, Illinois to his father, Vernion Talmadge Williams,... View Obituary & Service Information

The family of Devin McDowell Williams created this Life Tributes page to make it easy to share your memories.

Send flowers to the Williams family.