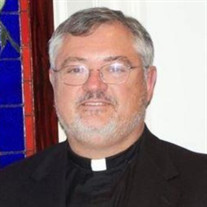 The Reverend Canon Donald K. Vinson, aged 70, passed away on August 30, 2020 in Huntersville, North Carolina while visiting family. Due to the pandemic, services celebrating his life and ministry will be held at St. John’s Episcopal Church in Huntington, West Virginia, and Church of the Holy Comforter in Gadsden, Alabama, at a later date. He is survived by his sons Daniel (Chantal) Vinson of Huntersville, North Carolina, and Philip (Deanna) Vinson of Lawrenceville, Georgia, their mother Linda Frost Vinson of Huntington, West Virginia, his brother Laurence (Mary) Vinson, Jr. of Mountain Brook, Alabama, and sister Rebecca (Richard) Stegall of Gadsden, Alabama, sister-in-law Jarilda Frost Swift of Springville, Alabama, brother-in-law Alonzo (Cynthia) Frost, Jr. of Hazel Green, Alabama, and numerous nieces and nephews whom he loved dearly. He is preceded in death by his parents, Laurence and Opha Stewart Vinson. Donald was born on September 29th, 1949, in Gadsden, Alabama. He graduated from Gadsden High (1967) and received his B.A. (1971) and M.A (1978) from the University of Alabama. For twelve years, he taught English and Drama at Southside High School where a drama award was recently named in his honor. He was an active member of the Church of the Holy Comforter where he sang in the choir. In 1984, Donald was accepted at General Theological Seminary in New York City, where he earned a Master of Divinity (1987). He served as Assistant Rector at St. Luke’s Episcopal Church in Mountain Brook, Alabama until he was called to be Rector at St Mark’s in Perryville, Maryland. In 1994, Donald was called to be the rector at St. John’s Episcopal Church in Huntington, West Virginia, where he served for 13 years. He accepted the position of Canon for the Diocese of West Virginia in 2007 before retiring in 2015. During retirement, Donald served as visiting clergy throughout the diocese culminating as interim Rector at St John’s in Charleston, West Virginia. Throughout his life, Donald served everyone he met with respect, love, and grace. He will be deeply missed. James Funeral Home of Huntersville, NC is serving the family of Mr. Vinson and online condolences can be made on jamesfuneralhomelkn.com.

The Reverend Canon Donald K. Vinson, aged 70, passed away on August 30, 2020 in Huntersville, North Carolina while visiting family. Due to the pandemic, services celebrating his life and ministry will be held at St. John&#8217;s Episcopal Church... View Obituary & Service Information

The family of Donald Keith Vinson created this Life Tributes page to make it easy to share your memories.

The Reverend Canon Donald K. Vinson, aged 70, passed away on...

Send flowers to the Vinson family.