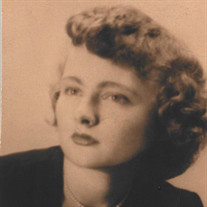 Elisabeth Flannigan Scattergood Born September 14, 1923, Betty was the only child of Eleanor Quinn and David Flannigan. Her early days were spent in her beloved Waverly, Minnesota, living just across the street from her grandparents, Mary and William Quinn. Her father’s job took them from coast to coast, but she always told her children she was most happy when she and her Mom returned to Waverly for summers. After graduating from high school in Bridgeport, Connecticut, Betty commuted by train into Manhattan daily to attend Katharine Gibbs school, which is said to have promoted a “message of female empowerment, teaching secretarial skills along with courses in serving tea and other societal refinements.” In July of 1945, Roderick Scattergood, who had just returned from three and a half years as a German POW, joined his parents on a business trip to Bridgeport and met Betty. It was love at first sight and though they lived a thousand miles apart, the romance continued long distance. They married six months later, were blessed with sixty-two years of love. They had five children who survive them: Kathleen, Suzanne, David, Mary, and Ken. Betty also leaves behind nineteen grandchildren, thirty-two great grandchildren and two great-great grandchildren. She was as comfortable preparing a meal for thirty as most people are making a ham sandwich. One of her most profound legacies was her commitment to helping those in need, which her family strives to continue. Due to COVID, the Mass of Christian Burial will be private and the family will plan a life celebration when gathering is safe. If you would like to make a donation in her memory, we believe she would most appreciate St. Jude’s or the Juvenile Diabetes Research Foundation. James Funeral Home of Huntersville is serving the family.

Elisabeth Flannigan Scattergood Born September 14, 1923, Betty was the only child of Eleanor Quinn and David Flannigan. Her early days were spent in her beloved Waverly, Minnesota, living just across the street from her grandparents, Mary... View Obituary & Service Information

The family of Elisabeth Scattergood created this Life Tributes page to make it easy to share your memories.

Send flowers to the Scattergood family.