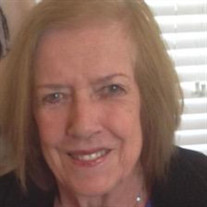 The world lost the warm, comforting presence that was Elizabeth Ruth Steffes Surane on Thursday, November 25 at the grand age of 84. In some ways, it was fitting that she left this world on Thanksgiving Day because she was always in her prime on holidays, holding court in her big kitchen preparing a delicious meal for her adoring family. In her life she had many nicknames: she was “Bette” and “Liz” to her loving husband of 64 years and “Betty” to almost everyone else. But the names she liked to hear the most were “Mom” and “Grandma.” She was a homemaker in the truest sense of the word: she dedicated her life to making her home a cozy, welcoming place where her children and grandchildren knew they could always drop by for a delicious meal or just a big hug. Born on the south side of Chicago, Betty discovered her passion for cooking when she was helping out in her family’s event hall as a child. As a young teen, she met her soulmate James William Surane and the two eventually held their wedding reception in that very same hall. Jim’s career ultimately moved the family all over the country: from the mountains of Colorado to sunny California to the swamps of Louisiana to the banks of the Ohio River in Louisville before they retired alongside the beautiful lakes of North Carolina. It was a lot of change for their seven children, and Elizabeth was their constant through it all. While Jim was often on the sidelines as a coach at every baseball game or football match, Betty was never far from his side. She was usually running the snack stand or coordinating the many pick-ups and drop-offs required for their family of nine. Her children still like to joke that she was the best Uber driver before Uber was even a thing. Grandma was an artist with a sewing machine or a crochet needle. She mastered the art of making hats and scarves and could turn them out in one hour flat. When her children were small, she made most of their clothing and dressed her girls in matching outfits almost every day - much to her daughters’ chagrin. Her family will forever cherish the homemade Easter baskets and warm blankets Mom left behind. But Mom was never more at home than she was in her kitchen. She loved to experiment and try new cuisines - from hosting enormous New Orleans-style crawfish boils to extravagant Japanese dinners complete with kimonos. Her family will dearly miss her creativity in the kitchen, even if it did mean sometimes raisins found their way into the tacos. A devout Catholic, Elizabeth rarely missed mass and instilled a strong sense of faith in all her children. She truly loved all of God’s creatures, especially dogs, and there was always a furry friend skittering around the floors of her many homes. Bette and her husband Jim were the life of every party. As soon as music would play, you couldn’t keep those two away from the dance floor. It gives her family great comfort to know Mom has been reunited with her dancing bear. If you listen hard enough, you can probably hear them waltzing around the pearly floors of Heaven right about now. Elizabeth was predeceased by her husband, James William Surane Sr. She is survived by her seven children and their spouses: Debra and Louis, James and Kimberly, Bobby and Liz, Johnny and Tania, Mary and Bob, Susie and Ben and Michael and Melissa as well as her sister Mary and her brother Bill. She will be forever missed by her 19 grandchildren and 10 great-grandchildren: Matthew, Kristen, Danielle, James, Jennifer, Jessica, Meagan, Caroline, Courtney, Catherine, Julianne, Bobby, Jake, Julia, Sean, Ryan, Lauren, Michael, Madison, Ava, Beau, Josie, Ellie, Madison, Jacob, James, TJ, Destiny and Elizabeth. The funeral mass will be held on Thursday, December 2, 11:00 AM at Holy Spirit Catholic Church in Denver with the interment following at Northlake Memorial Gardens. The visitation will be held on Wednesday, December 1, from 4:00-6:00 PM at James Funeral Home in Huntersville. In lieu of flowers, the family requests those who wish to express sympathy to consider making a donation to St. Jude’s Children’s Research Hospital in Elizabeth’s name. https://www.stjude.org/donate/donate-to-st-jude.html James Funeral Home, of Huntersville, is serving the family and obituary lovingly written by the family.

The world lost the warm, comforting presence that was Elizabeth Ruth Steffes Surane on Thursday, November 25 at the grand age of 84. In some ways, it was fitting that she left this world on Thanksgiving Day because she was always in her prime... View Obituary & Service Information

The family of Elizabeth Ruth Steffes Surane created this Life Tributes page to make it easy to share your memories.

The world lost the warm, comforting presence that was Elizabeth...

Send flowers to the Surane family.