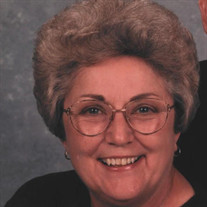 Elizabeth Carolyn Bailey Teague, of Monroe, joined a host of angels and reunited with her beloved husband, Harold Teague, of 60 years on October 7, 2021. She passed away peacefully at Atrium Health Union Hospital in Monroe NC after suffering from complications of Covid. She was a proud member of Independence Hill Baptist Church, which she attended before moving to Brookdale Union Park. Born in Wadesboro, NC on October 21, 1941, she was the daughter of William and Maggie Bailey. She was a devoted mother to her three daughters, volunteering at school functions for many years and teaching Sunday School at East Baptist Church, where she was a founding member, as well as Eastern Hills Baptist Church. Her children have such fond memories of her being excited about snow days so she could spoil them with hot chocolate while working puzzles or playing in the snow. They always knew that she would be the first to call them on their birthdays and sing “Happy Birthday” each time, even when her children were adults. Her quick wit and laughter echoed throughout her home and will be missed especially by her family. She always knew what to say to cheer them up in trying times or praise them during happy ones. Mrs. Teague was very crafty and loved painting ceramics and decorating for each holiday with love. Christmas was her favorite and her children and grandchildren looked forward to seeing her beautifully decorated tree and mantle each year, along with getting her famous Fudge and Cheeseballs that she made for each family. Another tradition was making cookies with the grandkids, which they looked forward to every year. In their later years after the daughters had grown and married, The Teagues took annual trips to the mountains, their favorite location, and would come back with mountain apples and handcrafted quilts for their loving home. Mrs. Teague is survived by her three daughters, Cynthia Teague Wagner (Wesley), Sheryl Teague Pierce (Joel) and Lisa Teague Rider (Bill), her grandchildren, Cameron Wagner (Amy), Cody Wagner (Shannon), Austin Pierce (Leslie), Kendall Cartwright (Patrick), Harrison Pierce, Jack Rider, and Ashlyn Rider, and her great grandchildren, Natalie Wagner, Jane Wagner, Emma Kate Wagner, and Theodore Pierce. Mrs. Teague is also survived by her brother, Richard Bailey and sister, Linda Plzak. The funeral will be held Tuesday, October 12, 2021, at 3pm at Independence Hill Baptist Church, 10220 Independence Hill Road, Huntersville NC with internment at the church cemetery. The visitation will be held one hour prior to the service at the church. In lieu of flowers, a donation to the Building Fund at Independence Hill Baptist Church would be appreciated. The family is being served by James Funeral Home.

Elizabeth Carolyn Bailey Teague, of Monroe, joined a host of angels and reunited with her beloved husband, Harold Teague, of 60 years on October 7, 2021. She passed away peacefully at Atrium Health Union Hospital in Monroe NC after suffering... View Obituary & Service Information

The family of Elizabeth Carolyn Teague created this Life Tributes page to make it easy to share your memories.

Elizabeth Carolyn Bailey Teague, of Monroe, joined a host of...

Send flowers to the Teague family.