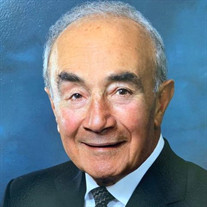 Denver--Dr. Emanuel (Manny) Rashet Doctor Emanuel “Manny” Rashet went to be with the Lord on June 11, 2020 after many years of fighting Parkinson’s Disease. Manny was born in Hamedan, Iran on July 31,1936. Following in the footsteps of his maternal grandfather he came to the U.S. to attend University of Illinois at the age of 17 with the goal of becoming a physician. He worked tirelessly to meet requirements for medical school while simultaneously learning the English language. He attended St. Louis University Medical School and Washington University for his pediatric training. He was a pediatrician in Belleville, Illinois for 36 years, touching countless lives through multiple generations. Upon his retirement, he began oil painting, which he pursued with the same passion and enthusiasm as he dedicated to his medical career. Relocating to Cornelius, NC after retirement, he was surrounded by a wonderful group of friends whose camaraderie whether playing golf, tennis, or exercising brought him great joy. Manny was the Doc they could all count on in times of difficulty. Known as “Poppy” to his grandchildren, he expressed his deep Christian faith through his trademark dinnertime prayer where he asked God to “be our guide every day of our lives.” This will certainly be his legacy. He is preceded in death by his mother, Joan Sayad Rashet, and father, Shmuel Rashet. He is survived by his lovingly devoted wife of 43 years, Nancy Hartman Rashet, his children David (Cheryl) Rashet of St. Louis, MO; Kelly (Jim) Hickey of Naperville, IL; Lisa (Kevin) Whitehead of St. Louis, MO; Susan (K.C.) Brechnitz of Charlotte, NC and nine grandchildren: Tom Hickey, Lindsey Whitehead, Hannah Rashet, Mimi Brechnitz, Greta Brechnitz, Lauren Whitehead, Will Hickey, Larson Brechnitz and Alyssa Rashet, who were the light of his life. He is also survived by his four sisters: Violet Rashet, Helen Rustamzadeh, Nellie Evazzadeh, Wilma Tamraz and many beloved nieces and nephews. He was an amazing brother, uncle, father and grandfather — a constant example of living honorably. Due to COVID-19 restrictions, a private graveside service will be on Saturday, June 20th in Fairview Heights, IL. Memorials may be made to Hospice and Palliative Care Lincoln County, 900 Donita Drive, Lincolnton, NC 28092. James Funeral Home of Huntersville is serving the family.

The family of Emanuel Rashet created this Life Tributes page to make it easy to share your memories.

Send flowers to the Rashet family.