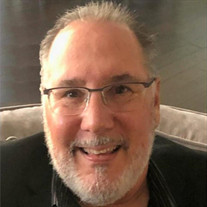 Eric Charles Hartwick, age 67, of Charlotte, NC, passed away peacefully on July 26, 2021 at his home with his family by his side. Eric was born on April 1, 1954, in McLean, Virginia to Glenn and Elizabeth Hartwick. He spent his childhood there and graduated from Langley High School in 1972. Throughout his youth, Eric and his parents, along with his sister, Linda, and his grandmother, Victoria, travelled to all 48 of the continental states, where they spent time camping, fishing, waterskiing, and kayaking. He played trumpet in the high school band. In later years he would pursue his true interest which was the guitar. He was the proud recipient of the Eagle Scout award, the highest rank in the Boy Scouts of America. He received a BS in Business Administration from George Mason University in 1977 and married the love of his life, Elaine Grefenstette, in 1982. Elaine’s job as a travel agent allowed them to travel extensively together, visiting Mexico, Bermuda, Austria, Switzerland, and Germany, where they found a cuckoo clock whose dancing figurines became a source of joy for their children and, later, their grandchildren. They spent many years living in Gaithersburg, Maryland, where they welcomed two daughters, before moving to Marietta, GA, where they completed their family with the birth of their son. Eric is survived by his wife of 39 years, Elaine; his children, Christina Pollard (Curtis), Melissa, and Mark (Autumn); his grandchildren, Rebecca, Brooklynn, Lauren, Moriah, and Malachi; and his sister, Linda Griffith (Mike). Eric retired in 2019 from a lifelong career in the insurance industry, where he received his CPCU certification and was instrumental in rolling out new company programs across the country for his employer. His CPCU award ceremony took place in Hawaii, where Eric and Elaine enjoyed time on Oahu before being joined by their children for an unforgettable week exploring the beaches and volcanoes on Maui. Eric had an enduring love of fishing and boating, with some of his favorite hours being spent on the lake with his wife, children, and grandchildren. He was also fond of birds and enjoyed collecting a variety of bird houses and feeders in his backyard. He would spend hours on his back porch enjoying time with his wife and watching the birds come to the feeders he unfailingly kept filled for them. Eric enjoyed studying finances, the stock market, and current affairs, and he loved watching baseball and football games with his family. He had a deep faith in the Lord, was kind, thoughtful, and caring, and was a pillar of strength for his family. He will be deeply missed. The family will receive friends from 2 p.m. until 3 p.m. on Sunday, August 1, with funeral services starting at 3 p.m. at James Funeral Home. Committal services will follow at NorthLake Memorial Gardens.

Eric Charles Hartwick, age 67, of Charlotte, NC, passed away peacefully on July 26, 2021 at his home with his family by his side. Eric was born on April 1, 1954, in McLean, Virginia to Glenn and Elizabeth Hartwick. He spent his childhood... View Obituary & Service Information

The family of Eric Hartwick created this Life Tributes page to make it easy to share your memories.

Send flowers to the Hartwick family.