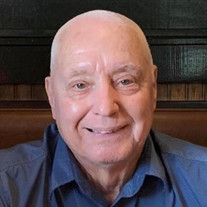 Frank Scammell, Jr., 79, passed away January 31, 2022, just six weeks after his wife, Norma J. Scammell, of 60 years. Frank was born in Elkhorn City, Kentucky, to the late Frank Scammell, Sr. and Kelsie Ramey Scammell. He was a Tipple Mechanic for the United Mine Workers at Bishop Coal Company. An avid fisherman and hunter, Frank was also a talented woodworker, welder, mechanic, carpenter, and implementer of all of Norma’s plans. He loved nature and any activity outdoors. Being a dad, granddad, and great granddad were his most important roles to all children in his life no matter their relation. He was the most wonderful husband, the most loyal of friends, and the most patriotic citizen as he was a proud United States Army Veteran. Frank is preceded in death by his wife, parents, older brother, CJ Scammell, and younger sister, Virgie (Scammell) Chapman. He is survived by his children, Frank Scammell, III (Marie) Roanoke, Virginia, and Jena M. Healy (Patrick) Denver, North Carolina, his six grandchildren, Kristy Vacek, Scott Marshall, Brandon Raines, Joseph Healy, Matthew Healy, and Chadwick Raines, his six great-grandchildren, the youngest, Tidus, holding a special place in his heart, along with many other children he loved as his own. Lucas and Melody, his rescue pups were near and dear to his heart. In lieu of flowers, please participate in a random act of kindness, donate to a charity that makes a real difference in your community, and/or make someone smile. Those are the things Frank did and would hope others would do. Frank's family would like to thank the incredible caregivers at Levine Dickson Hospice House in Huntersville, North Carolina, for their care and compassion as well as the incredible folks at James Funeral Home in Huntersville, North Carolina, for taking such amazing care of both Frank and Norma. Forever grateful his family will be. A celebration of life for Frank and Norma Scammell will be announced later to be held in the Spring.

The family of Frank Scammell Jr. created this Life Tributes page to make it easy to share your memories.

Send flowers to the Scammell family.