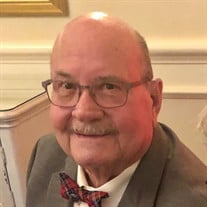 Gene Louis Ossler of Cornelius North Carolina, passed away peacefully at his home on Saturday evening, August 21, 2021 surrounded by his loved ones. Born in Hamlet Indiana on May 14, 1934, Gene was the son of the late Wilferd and Margaret Shankland Ossler. Gene grew up in Indiana before moving to Chicago as a young man where he started his 57-year career in the airline industry. Gene started in general aviation at Midway Airport in 1953 handling air freight, refueling and working as a gate agent – it was there that he met his future wife, Barbara O’Brian. He later joined Trans World Airlines (TWA) at O’Hare Airport and in a testament to the type of hard working individual that he was, he moved up through the organization and eventually became Vice President. In 1983, Gene left TWA and began working for American Airlines in San Francisco and then at the Dallas/Ft. Worth airport as manager for domestic and international air freight. He eventually relocated to North Carolina where he was the general operations manager at the Raleigh-Durham Airport before retiring in 2010. Gene is survived by his loving wife of 65 years, the former Barbara Jane O’Brian, whom he married on May 19, 1956. He leaves behind two children, Debra J. O’Handley (Dan) of Cornelius NC and Steven B. Ossler, also of Cornelius NC. He is also survived by six grandchildren, Dana Naughton (Jaime) of Queens, NY, Patrick O’Handley of Raleigh NC, Caitlin O’Handley of Washington D.C., Jessica Ossler of Canton IL and Lauren Ossler and Meghan Ossler of Reno NV as well as 5 great grandchildren. Gene is also survived by his sister, Barbara Abel (Butch) of Hamlet IN and sister-in-law Lillian Swale of Warrenville IL in addition to several nieces and nephews. Gene was predeceased by his son, Jeffery M. Ossler, his sister, Natheda Berg and a grandson, Jared Ossler. Services will be private – in lieu of flowers, donations may be made in Gene’s name to The Hope House Foundation, P. O. Box 61, Huntersville, NC 28070 or by visiting their website at www.hopehousefoundation.org. James Funeral Home of Huntersville is serving the family.

Gene Louis Ossler of Cornelius North Carolina, passed away peacefully at his home on Saturday evening, August 21, 2021 surrounded by his loved ones. Born in Hamlet Indiana on May 14, 1934, Gene was the son of the late Wilferd and Margaret Shankland... View Obituary & Service Information

The family of Gene Ossler created this Life Tributes page to make it easy to share your memories.

Send flowers to the Ossler family.