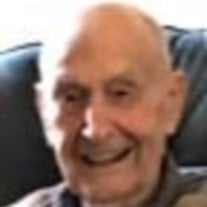 Glen Woodrow Reynolds, 99, died at home on January 14, 2022, 41 days prior to his 100th birthday. He was born in Houston County, Tennessee on February 24, 1922, to the late Amos Marvin Reynolds and Lucy Lena Petty. Glen was the last surviving... View Obituary & Service Information

The family of Glen Woodrow Reynolds created this Life Tributes page to make it easy to share your memories.

Send flowers to the Reynolds family.