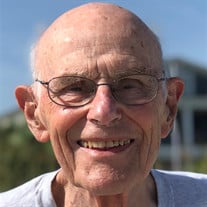 Harry C. Deitz, Jr., age 90, of Huntersville, NC, passed away peacefully in his sleep on February 27, 2022, in Huntersville, NC. Harry was born May 23, 1931, in McKeesport, PA, to Harry C. Deitz (his namesake) and Florence L. Francis, joining his sister June to complete their family of four. After graduating from McKeesport High School in 1949, Harry went on to graduate with a BS in Mechanical Engineering in 1953 at Carnegie Tech in Pittsburgh (where he was a member of Beta Theta Phi fraternity), served in the army as a Second Lieutenant from 1954-1956, and soon after earned his MBA from Case Western Reserve University. He met his future wife and life companion, Carol Williams, in Cleveland, Ohio. They married in 1961 and remained married until her passing just five short weeks before his death. Shortly after marriage they relocated to Fairfax, Virginia. This would be the place they would call home for the next 50 years. There they raised their three children and a niece they took into their home when she was just nine. They loved Fairfax and were especially close to their neighbors and their community of friends from Truro Episcopal Church. Harry worked many years for the U.S. Navy before retiring. Harry’s many interests included softball (he played into his 80s), soccer (he was a local referee into his 80s), antique car restoration, history, and playing the saxophone. His family and friends will remember him as a selfless, compassionate, kind and gentle man. A rare gem, he had the true gift of servant-hood. He daily cared for the needs of his youngest daughter throughout his life, and tended to the many concerns of his ailing wife over the last decade or so until he himself was physically unable to do so. He had a deep faith and could be found reading his Bible and underlining his favorite passages at the end of the day. He openly encouraged his children and grandchildren to “make Jesus your friend.” His love for his wife, children, niece, grandchildren, and great grandchildren was self-evident in how he lived his life. The pain of losing him will be felt by many. Harry is survived by his children Laurie (Terry), Harry, and Alane; his niece Tammy (Mark); his grandchildren Jennifer (Steve), David, Julieanne (Dennis), Katherine (Daniel), Derek, Erica (Sam), Ryan (Jill) and Michelle (Eric); and great-grandchildren Aurelia, Marielle, Reinhardt, Hank, Luca and Jude. He is preceded in death by his wife Carol, his father Harry, his mother Florence, and his sister June (Joe). Visiting hours are scheduled for Saturday, March 12th, 1:00-2:00 pm, at the James Funeral Home (10520 Arahova Drive, Huntersville, NC 28078). Funeral services will take place at 2:00 pm at this same location. A graveside service will be held at Northlake Garden Cemetery (11001 Alexanderana Road, Huntersville, NC 28078) at the conclusion of the funeral service. All services to be officiated by Pastor Paul Turbedsky of Grace Covenant church.

The family of Harry Deitz created this Life Tributes page to make it easy to share your memories.

Send flowers to the Deitz family.