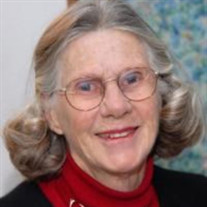 Helen Schrider Higgins, of Washington D.C., died peacefully with daughter Susan at her bedside on December 22, 2021 at the age of 91. In her final weeks, she enjoyed visiting with her children and grandchildren. Compassionate and loving care was provided by the staff at The Pines of Davidson, where she was living, and Hospice & Palliative Care Lake Norman. Helen was born in the middle of a snowstorm on January 30,1930 at Georgetown University Hospital in Washington, DC to Mildred Leasure Schrider and Charles Raymond Schrider. She grew up with her beloved parents and brother Howard Schrider on McKinley St. NW, Washington, DC. Helen attended Blessed Sacrament grade school and Holy Cross High School, going on to earn Bachelor of Fine Arts, 1951, and Master of Fine Arts, 1955 at The Catholic University of America (CUA). Her master’s thesis in terracotta relief sculpture depicting the life of St. Francis of Assisi, remains as a permanent installation on the Salve Regina Building at CUA. During college and graduate school, her experiences included work at The Pentagon as a secretary, at Providence Hospital as a nurses aid, as a camp counselor at Camp Wenonah in Maine, and as a secretary to the director of The Christ Child Society (later serving on the Christ Child Society Board of Directors). She met her husband Eugene A. Higgins on the campus of CUA and were later set up as Bridge partners by their dear friends Joan and Joe Doherty. Helen and Gene were married at The Shrine of the Blessed Sacrament in August of 1955. While Gene pursued a career in federal service as an attorney at The Federal Trade commission, Helen taught art at Georgetown Visitation High School and continued her passion for the arts through a daily creation of painting, drawing, sculpture or ceramics. Helen and Eugene were finally blessed with children after four years of marriage and raised nine children who remain in awe of the creative and generous life force that guided them through daily life, education, faith and celebrations of family, education, adventure, and home. They discovered the Outer Banks of NC when it was an undeveloped strip of sand dotted with small villages and hosting a naval base, local fishermen, and lightkeepers. Hatteras Island provided a summer haven for the large family and a muse for Helen’s creative talents. She was an active member of Our Lady of the Seas Catholic parish in Buxton, NC and at The Shrine of the Blessed Sacrament in Washington, DC. Helen is preceded in death by her husband Eugene Arthur Higgins, her parents Charles and Mildred Schrider, and her brother and sister-in-law Howard and Fredericka Schrider. She is survived by a host of friends near and far who will miss her dearly and by her nine children and their families, including 14 grandchildren and 2 great grandchildren: Jeannie Harris (Jim, Nicholas, Shannon and Jon Barber), Michael Higgins (Heather East), John Higgins (Kathy Schultz), Mary Higgins (Jay Townsend), Anne McMahon (Bill; Billy and Tali, Bryce, Lena; Stephen and Deanna; Andrew and Katie; Erin and Jacob), Paul Higgins (Rose), Peter Higgins (Kathy Gray, Kevin and Megan), Susan Reeves (John, Harrison and Katherine), and Clare Morton (Mike, Olivia, Luke and Peter). Gifts in her memory can be directed to Catholic University of America Art Department, The Christ Child Society of Washington, or another charity of your choosing. The funeral will be held on January 7th at 11 am at the Shrine of the Most Blessed Sacrament, 5949 Western Avenue NW, Washington, DC 20015 with a visitation with the family beginning at 10 am. For those unable to attend the service in person, it will be livestreamed at: https://youtu.be/nbIDRxmKNe4 James Funeral Home of Huntersville is serving the family.

Helen Schrider Higgins, of Washington D.C., died peacefully with daughter Susan at her bedside on December 22, 2021 at the age of 91. In her final weeks, she enjoyed visiting with her children and grandchildren. Compassionate and loving care... View Obituary & Service Information

The family of Helen Schrider Higgins created this Life Tributes page to make it easy to share your memories.

Send flowers to the Higgins family.