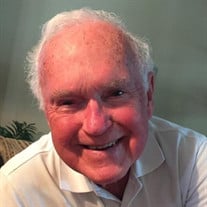 Herbert Curtis Needham, died on June 22, 2021 of Dementia. LTC Needham was born in Pilot Mountain, NC on May 15, 1932 and was a graduate of the University of North Carolina at Chapel Hill. He also did Graduate study in economics at George Washington University, Washington, DC. LTC Needham graduated from the Air Force Flight Training Program, and was commissioned a Second Lieutenant in February, 1956. He went on to advanced flight training in F-86 fighter jets, and flew them for several years. He later transitioned into larger passenger and transport aircrafts. During his 26 year career in the Air Force, LTC Needham served in several states within the United States, as well as in Vietnam, the Philippines, the Portuguese Azores, and at Midway Island. He flew his passenger and transport aircrafts to dozens of foreign countries, including Canada, Greenland, Iceland, Great Britain, Spain, France, Portugal, Germany, Italy, Turkey, Dominican Republic, Panama, Peru, Japan, Korea, Vietnam, Malaysia and many of the Pacific Islands. In LTC Needham’s view, his assignment to the 89th Military Airlift Wing at Andrews Air Force Base in Washington, DC, the so-called ‘Presidential Wing’, was his most memorable. While in this assignment, he flew many US and foreign dignitaries to locations throughout the United States, Canada and Latin America. A short list of his passengers would include Vice Presidents Gerald Ford and Nelson Rockefeller, Secretary of State, Henry Kissinger, the Nixon family, Senator Strom Thurmond and his wife Nancy, Israel’s Golda Mier, Jordan’s King Hussein, and the Shah of Iran, along with many others. LTC Needham’s military awards include the Bronze Star Medal/AF Commendation Medal, Air Force Expeditionary Medal, Armed Forces Reserve Medal, Air Force Longevity Service Award, Expert Markmanship Ribbon, National Defense Service Medal/Vietnam Service Medal, Vietnam Gallantry Cross and others. He was a proud and patriotic citizen of his country, loved his country’s flag and the United State Air Force. He was a staunch defender of conservative values. After retirement from the Air Force, LTC Needham pursued a career as a real estate developer with his two sons Mark and Scott. He continued to be active in operation of the company until 2018. He was one of the developers of Cornelius Woods, an active adult community of 110 homes in the vicinity of Mt. Zion United Methodist Church. LTC Needham also continued his passion of flying until 2019. He continued to maintain his Pilot’s License and his Flight Instructor’s License, and was a member of the pilot’s club The Quiet Birdmen, as well as being a member of the Aircraft Owners and Pilots Association, the Experimental Aircraft Association, the Dadaelian Society, and a life member of the Air Force Association. LTC Needham was a devout Christian and member of Mt. Zion United Methodist Church, Cornelius, NC. He was a member of the Don Bridger Sunday School Class and completed his training and was recognized as a Stephen Minister. LTC Needham is predeceased by his mother, Ardina and father, Arthur Needham. LTC Needham is survived by his loving wife Barbara (aka DB), two sons, Mark and his wife Lee Needham, and Scott and his wife Marilyn Needham of Mooresville, NC, and stepdaughter Julie Hensley and her husband Winston Hensley of Indian Trail, NC. He is also survived by one sister, Carol Hooker and her husband Douglas of Pilot Mountain, NC. He has two grandchildren, Kristen Saragoni and her husband Nick of Mooresville, NC and Curtis Lee Needham, of Charlotte, NC, and two step grandsons, Andrew and Grayson Hensley of Indian Trail, NC. The Memorial Service to celebrate Curt’s life will be held Monday, July 5, 2:00 PM at Mt. Zion United Methodist Church, 19600 Zion Avenue, Cornelius, NC. Military burial will follow at the church's cemetery and a reception afterwards in the Family Life Center at the church. In lieu of flowers, donations can be made to the Mt. Zion United Methodist Church Building Fund, 19600 Zion Avenue, Cornelius, NC 28031. James Funeral Home is caring for the family and obituary lovingly written by the family.

Herbert Curtis Needham, died on June 22, 2021 of Dementia. LTC Needham was born in Pilot Mountain, NC on May 15, 1932 and was a graduate of the University of North Carolina at Chapel Hill. He also did Graduate study in economics at George Washington... View Obituary & Service Information

The family of LTC Herbert Curtis Needham created this Life Tributes page to make it easy to share your memories.

Send flowers to the Needham family.