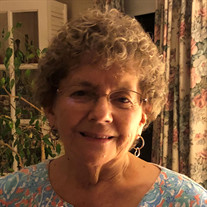 Irene Diederichs, 81, passed away Thursday, April 14, 2022 at the nursing home where she resided in Kannapolis, NC with her daughter by her side, holding her hand as she transitioned to the presence of her Lord and Savior. Born at the Lyon Family Homestead on Main Street Dolgeville NY December 6, 1940, She was the 6th of 14 children of the late George and Grace (Cramer) Lyon. Irene graduated from Dolgeville Central School in 1959 and later that year married Ralph Sterusky. They had five children together and were divorced in 1969. She worked at Lyon Greenhouses in Dolgeville for many years and then obtained her license to drive a tractor trailer. She then worked at Baker's Greenhouse in Utica, NY until she secured a job with the DOT in Herkimer NY where she drove a snow plow. Irene married Paul Diederichs in 1991 and together they ran the Windy Tavern for several years. Her last employment was working at Dopp's Inn in Dolgeville, retiring and moving to NC in 2004. In NC she attended the Cove Church in Mooresville and served the Lord on the Baptism Team. She was part of a Life Group with many wonderful ladies from the church. They enjoyed studying the Bible and serving others in the community. Even after she was no longer able to join them in person, their love and prayers followed her. Irene enjoyed collecting bells and making latch hook rugs/wall hangings. She was also a good cook and baker. She made and decorated birthday and wedding cakes for many years. Irene is survived by her 6 children, Lora (Sterusky) Rehm and her husband Paul of Apex, NC, David Sterusky of Little Falls, NY, Christopher Sterusky and his wife Brenda of Radcliff, KY, Ralph Sterusky of Little Falls, NY, Paula (Sterusky) Cramer and her husband Bruce of Sanborn, NY and Leslie (Lyon) Hicks and her husband Greg of NC. Also 8 grandchildren and 8 great-grandchildren. Additionally, she is survived by 2 sisters and 5 brothers, Grace Anna Eggleston of Dolgeville, Bruce Lyon of Dolgeville, Marsden Lyon of Whitesboro NY, Noreen Crane and her husband Jim of Dolgeville, Duane Lyon and his wife Donna of Flowery Branch GA, Daryl Lyon and his wife Julia of Dolgeville and George Lyon and his wife Char of Sauquoit NY and a sister-in law Donna (Arndt)Lyon of Dolgeville along with many cousins, nieces and nephews. Irene was predeceased by her husband Paul Diederichs, her siblings Shirley Williams, Craig Lyon, Merwin Lyon, Arlene Stacy, Waldo Lyon, Nadine Spencer, a special sister-in-law Annette Lyon and three grandchildren Ashley Sterusky, Amanda Sterusky and Christopher Michael Sterusky. Family will receive visitors at James Funeral Home in Huntersville NC April 23, 2022 at 1pm and services to follow at 2pm. Memorial gifts to the Alzheimer's Association can be made in lieu of flowers. A graveside ceremony in NY followed by a celebration of life is also being planned for family and friends in NY. James Funeral Home, of Huntersville, is serving the family and obituary lovingly written by the family.

Irene Diederichs, 81, passed away Thursday, April 14, 2022 at the nursing home where she resided in Kannapolis, NC with her daughter by her side, holding her hand as she transitioned to the presence of her Lord and Savior. Born at the Lyon Family... View Obituary & Service Information

The family of Irene Diederichs created this Life Tributes page to make it easy to share your memories.

Send flowers to the Diederichs family.