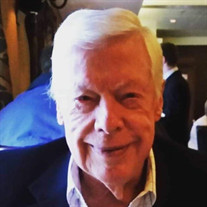 John Burton (Captain Burt) Cousar, Sr., of St. Simons Island, Atlanta, GA and most recently Concord, NC, 95 passed away March 7, 2022. Born November 16, 1926, at Kings Daughter’s Hospital in Staunton, VA, to the Reverend Doctor Robert Wilbur Cousar, and Nellie Irving Blanton Cousar he grew up in Chattanooga, TN, where his father was minister of Central Presbyterian Church. Burt attended Chattanooga High School and joined the U.S Navy 1944-1946 as an AOM - Aviation Ordnanceman 1st Class, ultimately based in Hawaii. After World War II Burt returned to Chattanooga to continue his studies at the University of Chattanooga while working for Neighbor’s Manufacturing. In 1959, Burt and his wife Jane moved to Atlanta where the born salesman first had a partnership named Bearden, Bell and Cousar where he was a member of the Million Dollar Round Table. He ultimately opened his own company, Cousar & Associates, Inc., a pension and profit-sharing consulting firm, in 1973. He was a longtime member of Ansley Golf Club. Always a humble man who delighted in other’s successes, he could be described as nice as Andy Griffith with just a dash of Archie Bunker. If he wanted to do something he would do it. In 1962 he learned how to fly a plane and loved his Cessna Skylane. He used it to travel to work throughout the South and would take his wife (clutching her Bible) and children to fun destinations. He piloted his last flight in 1999. He also had a lifelong love affair with boating. His young family lived on a houseboat in the summers and in 1993 he earned his U.S. Merchant Marine Officer’s license from the U.S. Coast Guard to allow him to courier ships up to 100 gross tons while on sabbatical from work. You could always count on Burt to be looking for a boat, trying to rebuild a boat or studying a map for his next excursion, whether it be by sea or air. In 1980 he ran the New York Marathon (Time 3:40:39), one of his proudest achievements. In his retirement years he volunteered with the Georgia Port Authority as transportation for visiting crews to visit local stores. A lifelong Presbyterian, Burt was formerly a member, Sunday School Teacher, Deacon and Elder of Northwest Presbyterian Church in Atlanta and was a member of St. Simons Presbyterian in St. Simons, Ga. His last church was Ramah Presbyterian Church in Huntersville, NC. Here he enjoyed the church family, even when he could not hear the service or chatter. Survivors include his children, Jonathan Burton Cousar (Sheena Nasreen), their children Myles Burton and Shyanna Starr Cousar of Union City, NJ and Starr Cousar Miller (Thomas Frederick) of Davidson, NC. He is proceeded in death by his former wife Jane Bretske Cousar and wife Deedy King Cousar, brothers, Dr. Charles Blanton Cousar and Dr. Robert Wilbur Cousar, Jr. and his parents. The family is thankful for the team at The Gardens of Taylor Glen, Calvin and Caroline Cook, and Janice Green, for helping him in his later years. On Monday, March 14, 2022 at 10:00am there will be a memorial service at Ramah Presbyterian Church, 14401 Ramah Church Rd, Huntersville, NC 28078, followed by a reception in fellowship hall. Pastor Bill Watkins will officiate accompanied by the Reverend Bob Brearley. Burial will be at Bishopville Presbyterian Church, 215 S Main St., Bishopville, SC 29010 at 3:00pm the same day. In lieu of flowers, the family requests that memorial gifts be sent to the Charles B. Cousar Scholarship Fund, Columbia Theological Seminary, P.O. Box 520, Decatur, GA 30031. We are all secure in knowing he is now free to roam around heaven looking for a boat. James Funeral Home is entrusted with his final care.

The family of J. Burton "Burt" Cousar created this Life Tributes page to make it easy to share your memories.

Send flowers to the Cousar family.