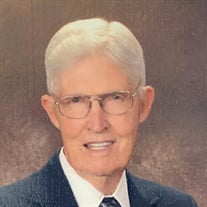 Jack Withers Archer, 90, of Davidson, NC died Tuesday, August 31, 2021. He was the last of 11 children born to David Sylvester Archer and Pearl Christie Archer. His parents and siblings: Evelyn Archer, Robert Archer, Alsie Arndt, J.B. Archer, Connie Kelly, Ray Archer, Irene Rice, Dot Isenhour, Kenneth Archer and Ted Archer preceded him in death. Jack was born into a Baptist family, a number of his nephews are Baptist ministers, but after marrying Odessa Torrence of Davidson, he became an active Methodist. His brother, Kenneth, a Baptist minister, performed the wedding in the Davidson Methodist Church Chapel in 1951. After graduating from Cornelius High School in 1949, Jack joined his family in the construction business. He went into sales in 1955 and spent 36 years with Kraft Foods. He and his family moved from Davidson to Hickory in 1973 where Jack was District Sales Manager. They lived there 25 years before retiring back to Davidson and becoming an active member of the Bill Hight Sunday school Class. He was a past president of the class as well as a past president of the Lions Club of Davidson. Jack enjoyed spending time with friends and family, Davidson College Basketball and playing golf. He was proud of the trophy he got for his "hole in one" at Foxden on July 8, 1998. He is survived by his wife of 70 years and their children: Richard Gregory Archer (Betty Odell), Ronald Lee Archer, and Susan Patricia Archer; grandchildren, Richard, Jr., Allan and William Archer, D.J. and Lilly Gates, Kelly Odell and Robert Odell, Jr. (Liza); great-grandchildren, Ella Rose Miller and Nina Ruth Odell and many loving nieces, nephews and cousins. A graveside celebration of Jack's life for family and friends is to be held at Mimosa Cemetery on South Street in Davidson at 11 AM on Saturday, September 11, 2021 with Rev. Jim Humphries officiating. In lieu of flowers, memorials may be made to the Senior Ministries, Davidson U.M.C., P.O. Box 718, Davidson, NC 28036. James Funeral Home is serving the family and online condolences can be left at jamesfuneralhomeLKN.com

The family of Jack Archer created this Life Tributes page to make it easy to share your memories.

Send flowers to the Archer family.