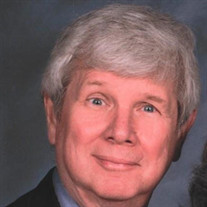 James E. “Jimmy” Akins, of Huntersville, NC passed away March 22, 2021, following a 15 year battle with Alzheimer’s and cancer. He graduated from Thomas Dale High School and then Virginia Tech. with a degree in Chemical Engineering. During his time co-opping at VT, he met his wife, Carolyn, with whom he recently celebrated 56 years of marriage. Jimmy worked for Hercules in the late 60’s through the mid 70’s before embarking on a career in real estate for the next decade. He returned to his roots in Chemical Engineering with a regional sales position at Voight-England and later with T.E. Byerly before retiring in 2010. He was fortunate to forge many lifelong friendships with colleagues during his career. Jimmy’s greatest joy was spending time with his family, traveling, playing bridge and going out on the river. He leaves behind his wife, Carolyn; his son, Jeff and wife, Marlea and their two children; his daughter, Deb and her husband, Brad. Also, he leaves behind his precious grandchildren – Ethan James and Elizabeth Lane. Jimmy has one brother, Larry and his wife, Rita. Jimmy leaves behind many nieces and nephews. The Funeral Service will be held on Friday, March 26, 11:00 AM at James Funeral Home in Huntersville. The visitation will be the day prior on Thursday, March 25, from 5:00-7:00 PM at the same location. In lieu of flowers, memorials may be made to the Alzheimer's Association at https://act.alz.org/site/Donation2?df_id=47784&mfc_pref=T&47784.donation=form1&32112.donation= James Funeral Home, of Huntersville, is serving the family. The obituary was lovingly written by the family.

James E. &#8220;Jimmy&#8221; Akins, of Huntersville, NC passed away March 22, 2021, following a 15 year battle with Alzheimer&#8217;s and cancer. He graduated from Thomas Dale High School and then Virginia Tech. with a degree in Chemical Engineering.... View Obituary & Service Information

The family of James Akins created this Life Tributes page to make it easy to share your memories.

Send flowers to the Akins family.