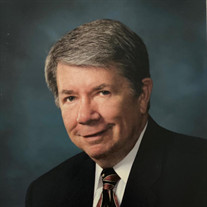 James "Jim" Edward Cox, Jr., 79, of Huntersville died March 20, 2021 at his home. He was born on January 27, 1942 in Miami, FL to the late James and Marie Cox. In March 1968, he married the love of his life, Anna Marie Summar. They went on to have two children, Jeffrey and Jennifer. Later, he cherished his five grandchildren, who knew him as “Papa.” His family meant more to him than anything else in the world, which is something he would talk about as much as someone would listen. Anyone who knew Jim would agree that he was the most loving husband, father, and Papa a family could ask for. After earning a business degree at Oglethorpe University, Jim enjoyed a long career in the shipping industry, which took him to ports around the world. He also had a passion for playing golf and fishing. Whether Jim was with family, working, or on the golf course, he was usually telling jokes, laughing, and making his family, friends, and colleagues smile. Survivors include his wife Anna Marie Cox; son, Jeffrey Cox (Gina) of Pompano Beach, FL; daughter, Jennifer Jeter (Charles) of Huntersville; grandchildren, Caroline, Christian, Ellie, Carlee and Charlie. Memorials may be made to Davidson United Methodist Church. www.davidsonumc.org A funeral service will be held at 11 am Tuesday, March 23 at James Funeral Home. Visitation will be 10-11 am prior. Burial will follow at Northlake Memorial Gardens. James Funeral Home of Huntersville is serving the family. www.jamesfuneralhomeLKN.com

The family of James Cox created this Life Tributes page to make it easy to share your memories.

Send flowers to the Cox family.