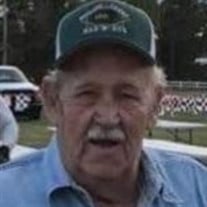 James Cochran (Jimmy) DeArmon Sr. was born January 31, 1939 in Charlotte at Presbyterian Hospital. He graduated from North Mecklenburg High School in 1957. At the age of 7, he lost his four fingers on his left hand due to an accident on the farm (but not picking his nose as he often told the little ones). At the young age of 15, he became a volunteer fireman for the Derita Volunteer Fire Department. He served on the board of directors for years and remained a volunteer until it closed in 1997. After graduation, he bought his first tractor and continued to carry on the farming tradition. In August 1961, he married Doris Diggs and opened the DeArmon’s American Oil service station in Derita. He pumped gas and provided full service to many customers. He made many friends with the customers and with the “loafers” that hung around. In the early 80’s, the service station was sold and he went back to his farming roots and began mowing fields and harvesting hay, he would often call it piddling. He would do anything to help out others and that led to jobs like driving a pit stop competition truck all over the country, working for Hunter Landscape, delivering Girl Scout cookies and buying and selling equipment (Godley Auction regular). Later, as the development swallowed up his favorites fields to mow he started traveling the country and visiting Vegas or Tunica, Mississippi multiple times a year and enjoyed every minute of it. He is survived by his wife of 60 years, Doris, his children Kim DeArmon Tucker (Tracy), Frances DeArmon Justus (Barry), James C. DeArmon, Jr. (Sheila), his grandchildren, Kaleb Tucker (Abby), Annie Justus, Abby Tucker, Jackson Justus, Sarah DeArmon, a host of other relatives and too many children that he helped raise to count. Services to honor Jimmy will be held at the Mallard Creek Presbyterian Church Community House. It will be outdoors and casual. The service will be held at 10 AM Saturday, August 28 with visitation to follow. In lieu of flowers, memorials may be made to the Mallard Creek Presbyterian Church Building Fund. James Funeral Home of Huntersville is serving the family.

James Cochran (Jimmy) DeArmon Sr. was born January 31, 1939 in Charlotte at Presbyterian Hospital. He graduated from North Mecklenburg High School in 1957. At the age of 7, he lost his four fingers on his left hand due to an accident on the... View Obituary & Service Information

The family of James DeArmon created this Life Tributes page to make it easy to share your memories.

Send flowers to the DeArmon family.