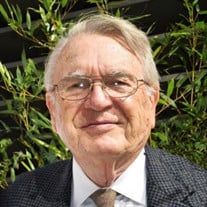 Davidson, N.C. - James (Jim) Elliott passed away peacefully on December 28, 2020 at The Pines at Davidson. Jim was born on November 10th, 1925 in Lincolnton, NC, the son of William Forrest Elliott, MD and Mary Lily Johnson Elliott. He graduated from Lincolnton High School in 1942 and was able to complete two years of study at Davidson College before being drafted into the USA Navy to serve in the Hospital Corp during World War II. After the war, he returned to Davidson and graduated in 1948 with a B.S. degree in Biology. Jim continued to pursue his interest in medicine at The Medical College of Virginia in Richmond, earning the degree of Doctor of Dental Surgery. Shortly after, the Korean War called Jim to service again, this time in the US Air Force as a First Lieutenant in the Dental Corps. After completing his military commitment, he established his private dental practice in Charlotte. Jim was a well-respected dentist and ran a busy practice from 1955 until 1990, when he retired. After retirement, Jim and his wife, Jane, moved to the town of Davidson. During his life, Jim held various leadership positions in local and NC professional organizations. He was also very active in the Church, serving as a member of choirs and offertories alike. In addition, he enjoyed his involvement with the boards of several local institutions including The Charlotte Latin School, The Winghaven Foundation, The Pines at Davidson, and The Board of Visitors at Davidson College. Jim also enjoyed many hobbies throughout his life. He was a talented artist and an avid gardener. He loved painting landscapes and scenic vistas from his beloved North Carolina. He also loved painting portraits, and in his later years he took delight in painting the pets belonging to family and friends. Jim was a man of many talents and was a gift to all who knew him. Jim is survived by his wife, Jane Richards Elliott, his two children Jane Murphy of Cornelius, NC and James Elliott, Jr., of Larkspur, CA, and their respective spouses Brian and Sharlyn. He is also survived by his three grandchildren: Caroline Murphy; Kayden Elliott and Attison Elliott. Jim was predeceased by his sister, Virginia Elliott Taylor of Norfolk, Va. and his brother, William Cromartie Elliott, MD of Indianapolis, IN. The family would like to thank the staff and nurses at The Pines Healthcare for their dedicated and loving care, as well as Hospice of Iredell County. The family is forever grateful. In lieu of flowers, memorial gifts may be made to The Pines at Davidson – The Chaplaincy Fund, 400 Avinger Lane, Davidson, N.C. 28036. An interment service will be held at Davidson College Presbyterian Church for immediate family members at a later date.

The family of James Elliott created this Life Tributes page to make it easy to share your memories.

Send flowers to the Elliott family.