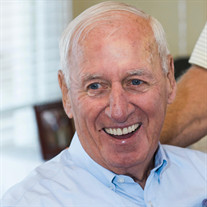 Stanley, NC- James William Surane, Sr. The world lost the bright light that was James William Surane, Sr. on January 24 at the grand age of 84. He died as he lived, smiling and surrounded by his family that absolutely adored him. He was a giant among men, known for his charm and a swagger on the dance floor that earned him the nickname "Dancing Bear" from all that were lucky enough to party with him over the years. Born on the south side of Chicago to parents John Francis Surane and Margaret Mary Foley Surane, the happiest moment of his life was when he met his soulmate and lifelong partner Elizabeth “Betty” Steffes at 15 years old. He went on to attend Marquette University on a football scholarship and later served in the Army, where he worked with artillery and other heavy-duty weaponry. Jim was a devout Catholic who always made it to mass on Sundays. You would never find him without his wardrobe staples - his scapular necklace and the rosary in his pocket. He spent much of his career as an executive in the hardware industry jet-setting all over the globe, delivering his signature smile and charisma to ink deals. It was precisely that moxie that helped at least one son, who once phoned home when his car broke down in the middle of a road trip. Jim convinced the mechanic to fix up the car and get his son on his way in exchange for sending the shop a few chainsaws the following morning. A true company man, Jim was once tasked with taking care of lion cubs as part of a promotion his office was running. The first two cubs were too unruly to keep, but he kept the third cub and named her Tina. Jim was known for taking Tina on long walks around the neighborhood and she joined him on all his business trips in the family station wagon until she started tearing up hotel rooms while he was out pitching clients. After Tina, he stuck to his favorite: dogs. But Jim’s favorite job was the one where everyone called him Dad. He was at every baseball game, wrestling match, gymnastics meet, swimming meet, and football practice. He bragged to anyone who would listen about his son who made it to the minor leagues. He was always on the hunt for a good deal and you could often find him in the kitchen, clipping coupons for the inevitable errands run or trip to the grocery store. He will be remembered as the life of every party he ever attended. In fact, it often didn’t feel like a party until Jim showed up. He went to great lengths to make every gathering special - even ordinary family dinners. After he was gone for one particularly long business trip to Japan, Jim and Betty arranged for everyone to eat dinner on pillows on the floor. When Jim finally joined them downstairs, he was wearing a traditional Japanese robe and headdress. And then there was what became known as Surane Nights, where Betty made hamburgers with all the fixings. But Jim spent all day looking forward to his favorite part of the meal: canned tamales. For his grandchildren, Popsie was the ultimate prankster. In one memorable family gathering at his home in Louisville, he howled with laughter when his daughters and granddaughters put on their slippers only to find dead bugs that he had placed there the night before. As payback, a band of cousins went on a late-night adventure to take a bite out of every single donut that Popsie had been eyeing for his breakfast the next morning. Jim kept everyone laughing over the years, but he also kept us together. He made sure his home was always a place for everyone to gather for holidays and weddings, graduations and christenings. And even as he aged and arthritis filled his bones, he still made sure to drive his eldest daughter to every single chemotherapy appointment. Jim is survived by his loving wife of 64 years, Betty, and their seven children and their spouses: Debra and Louis, James and Kimberly, Bobby and Liz, Johnny and Tania, Mary and Bob, Susie and Ben and Michael and Melissa. He will be forever missed by his 19 grandchildren and 10 great-grandchildren: Matthew, Kristen, Danielle, James, Jennifer, Jessica, Meagan, Caroline, Courtney, Catherine, Julianne, Bobby, Jake, Julia, Sean, Ryan, Lauren, Michael, Madison, Ava, Beau, Josie, Ellie, Madison, Jacob, James, TJ, Destiny and Elizabeth. We love you, Pops. The funeral mass will be on Friday, January 29, 2021, 11:00 AM at Holy Spirit Catholic Church in Denver, NC. The visitation will be on Thursday, January 28, 2021, from 6:00 to 8:00 PM at James Funeral Home in Huntersville, NC. The interment will be following the funeral mass at Northlake Memorial Gardens in Huntersville, NC. James Funeral Home of Huntersville is serving the family.

The family of James William Surane Sr. created this Life Tributes page to make it easy to share your memories.

The world lost the bright...

Send flowers to the Surane family.