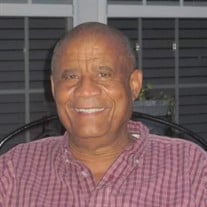 Fritz Dambreville 82, of Huntersville, NC went home to be with the Lord on January 1, 2021. Fritz was born in Petit-Goave, Haiti and moved to the United States in 1968, to New York. He went to school in Haiti. He received an Associates in Political Science at Oklahoma State University. His first job was at Lafayette Radio, Brooklyn, NY. He then worked for the Tulsa Public School System, Oral Roberts, Piedmont Airlines, and US Airways. He retired after 26 years with American Airlines. He also worked for the Sheraton Hotel for 30 years. Fritz lived a good life. He loved people, politics, watching news and spending time with family. He never met a stranger. His parents were Genevieve Morency and Charles Dambreville. He was adopted by his aunt & uncle, Saide Guirand Dure and Moreau Dure. Survivors include his wife, Paula Dambreville, 33 years met and married in Tulsa, Oklahoma in 1987; children Alain, Alana, Ashley (Vanity), Aric (Shana), Richard, Dominic (Kerri); grandchildren Tiana, Kamiya, Isiah, Sanai, Matthew, Hayllie, Hannah, Joshua, Camren, Nolan, Ava; great-grand Tre; sisters Monique Constant Jungel (Oliver Jungel), Ingrid Rousseau (Cortez Rousseau), Jan Pringle (Bruce), and Francis Anderson; and a host of nieces, nephews, other relatives, and friends. Fritz was a family man who loved his wife and children if you spent any time with Fritz he would show you pictures of his children and grand children. When Ashley and Aric went off to college, he cried for several weeks and call them everyday making sure they had everything they needed. He loved all his grandchildren, spending time playing with them, taking them to the park, and picking Camren up from school, buying him junk food was his delight. Whenever the grandchildren came over we always had a meal because that was one thing Fritz loved to see you eat and be happy. Six years ago three of our sons got married all in one year he was the proud father at each wedding. At the weddings he danced and had great time with his daughter Alana and granddaughter Tiana. Several summers his granddaughter Kamiya would come to spend time with him. Fritz Adored his only daughter Alana he was very proud of all her accomplishments. Also, he loved his son Alain and spoke with him daily to share life’s events. Fritz was a very intelligent man that spoke several languages and could tell you about any historical event. Throughout his life he worked two full time jobs to provide for his family. He took great pride in his jobs and enjoyed the camaraderie of his coworkers. Fritz had a work ethic that was unmatched! He was always willing to lend a helping hand and was a man of his word. Fritz will be truly missed by his family and friends and though no longer here with us physically he will forever be with us in spirit. His legacy will live on as a loving father, hard working man, peaceful, and always with a smile. His motto was "DO YOUR BEST AND LET GOD DO THE REST!" A memorial service will be held at 2 PM Saturday, January 9 at James Funeral Home. Visitation will be 1-2 PM prior. James Funeral Home of Huntersville is serving the family.

Fritz Dambreville 82, of Huntersville, NC went home to be with the Lord on January 1, 2021. Fritz was born in Petit-Goave, Haiti and moved to the United States in 1968, to New York. He went to school in Haiti. He received an Associates in Political... View Obituary & Service Information

The family of Jean Fritz Dambreville created this Life Tributes page to make it easy to share your memories.

Fritz Dambreville 82, of Huntersville, NC went home to be with...

Send flowers to the Dambreville family.