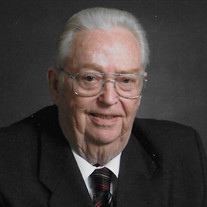 Jesse Grady Crowell, 94, of Cornelius, died on August 11, 2021. He was born in Union County, North Carolina to the late William and Lelia Crowell. Jesse grew up in Union County. He joined the Navy January 10, 1945. After getting out of the Navy, he worked at Gibson Cotton Mill for a year. He began working at Union Carbide as a machine mechanic in Charlotte in 1948. During his time at Union Carbide he met and later married Inez Harris. Jesse worked at the Charlotte plant until it closed in 1978. He then transferred to the Asheboro plant. He worked there until he retired in 1985. He worked at Union Carbide for 37 years. Jesse and Inez were married June 27, 1954. They were married for 60 years and had 4 children. They began their marriage living in the Derita area before building a house in Harrisburg NC. A few years later, they built their home on Lake Norman. They moved into it in 1967. Jesse lived there for 54 years. During their retirement Jesse and Inez were able to travel all across the United States and Europe. Jesse was a big fan of country music and they frequented the Grand Ole Opry in Nashville as well as Branson, Missouri. They spent many years vacationing in Florida in the winters. Jesse and Inez were devoted members of the First Baptist Church of Cornelius for many years. In addition to his parents, Jesse was preceded in death by his wife, Inez Crowell; son, Glenn Crowell, 3 brothers, and 3 sisters. Jesse is survived by his daughter, Amy Biggerstaff (Harold); sons, Mark Crowell (Linda) and Lloyd Crowell (Cindy); grandchildren, Tammy Smith (Chris), Gary Branch (Ginny), Erin Fesperman (Vic), Sarah Gazaway (Chris), Katie Crowell, Andrew Crowell (Sussy), and 7 great grandchildren. Visitation will be Friday August 20th from 1pm to 2pm at First Baptist Church of Cornelius. The memorial service will follow at 2pm.  In lieu of flowers, memorials may be made to the First Baptist Church of Cornelius and the Levine & Dickson Hospice House – Huntersville. James Funeral Home, of Huntersville, is serving the family and obituary lovingly written by the family.

Jesse Grady Crowell, 94, of Cornelius, died on August 11, 2021. He was born in Union County, North Carolina to the late William and Lelia Crowell. Jesse grew up in Union County. He joined the Navy January 10, 1945. After getting out of the... View Obituary & Service Information

The family of Jesse Crowell created this Life Tributes page to make it easy to share your memories.

Send flowers to the Crowell family.