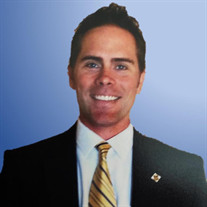 John William Bost III, our beloved son, adored brother, and friend to many across the country, was unexpectantly called to Jesus on July 28, 2020, at the age of 41. John is survived by his parents; his brothers and sister in law, Matthew, Miryam and Adam Bost; his nephew Gavin Bost; and his significant other Eren Kamiyama. He is predeceased by his grandfathers, John William Bost Sr. and James Hutchens and his grandmothers, Helen Bost and Ann Munday. John was born in Statesville, North Carolina, on February 9, 1979, to John William Bost Jr. and Joyce Bost. He graduated from the University of North Carolina at Charlotte in 2000 with a degree in Criminal Justice and served as a police officer for the Charlotte Mecklenburg Police Department. In 2006, John graduated from the Bureau of Alcohol, Tobacco, Firearms, and Explosives as a special agent and was stationed in Hawaii. Later in 2012, John was recognized as the Hawaiian Law Enforcement Officer of the Year. John was a devout Christian. He had a charismatic personality that resulted in instantaneous friendships. He was an avid outdoorsman that loved to travel. His hobbies included hiking, surfing, paddle boarding, scuba diving, snorkeling, and rowing. He visited several countries including Mexico, Germany, and Australia. John was well known for both his attention to detail as well as his witty banter. He will be deeply missed by his friends, family, and all who knew him. A receiving of friends is scheduled for 1:00 pm on August 7, 2020 at Northside Baptist Church on 333 Jeremiah Blvd, Charlotte, NC. Following the reception, the funeral ceremony will begin at 2:30 pm. Rev. Wally Carmichael and Rev. Steven Stinson will officiate. Memorials may be made to the ATFA Foundation at https://atfafoundation.org Flowers, donations, and condolences may be offered at James Funeral Home LKN 10520 Arahova Dr Huntersville NC 28078. Online condolences may be made at www.jamesfuneralhomelkn.com

John William Bost III, our beloved son, adored brother, and friend to many across the country, was unexpectantly called to Jesus on July 28, 2020, at the age of 41. John is survived by his parents; his brothers and sister in law, Matthew, Miryam... View Obituary & Service Information

The family of John W. Bost III created this Life Tributes page to make it easy to share your memories.

Send flowers to the Bost family.