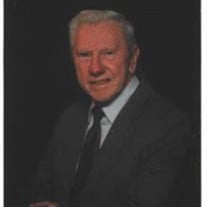 John Samuel Dellinger, 100, beloved husband, father, and PaPa, died peacefully on Friday, January 15, 2021, after a brief illness. He was born on July 31, 1920, at St. Peter's Hospital. A proudly independent native son, he was descended from the Dellinger, Overcash, and Alexander families who settled Mecklenburg County. He attended Nevin School and graduated from Derita High School in 1937. As a teenager, he delivered ice uptown in a horse-drawn cart and pumped gas at Mr. Mack's Graham St. filling station. A talented mandolin and fiddle player, he played traditional and popular music with his father at area dance halls, Catawba River fish camps, and for live broadcasts on WBT radio. His stories of youthful escapades included fond memories of his Ford Model T and his good friend, Lee Dukes. He met the love of his life, Marion Olean Cooper, at a youth group meeting at Statesville Avenue Associate Reformed Presbyterian Church, where they were married April 7, 1943. Sam served in World War II on Guam as a B-29 engine mechanic for the U.S. Army's 20th Air Force, 314th Wing, 19th Bomb Group, 30th Squad. With his often remembered crewmates, "Fuzzy," Maccio, and Passero, he watched their assigned B-29 (named The Third Marine Division in honor of the ground force they supported) take off on August 14, 1945, unaware that it was to be the last Allied combat run of the war. He recalled that, the next day, he knew the war was over when all their aircraft returned from Japan. After the war, he returned to his job as a mechanic at Gathings Motor Company on S. Tryon Street. In 1955, he began working for the N.C. DOT's Maintenance Division and he retired in 1985. Never too old in spirit for a high speed lap around the Charlotte Motor Speedway, only his doctor could stop him from taking a final lap in his 80's. He took pleasure in maintaining and repairing household items and equipment, ranging from his automobiles to a cherished antique mantel clock. His great joys were family vacations at the beach and Sunday family diners. Sam was preceded in death by his wife, Marion Olean Cooper, and parents, Roscoe and Fannie Overcash Dellinger. He is survived by his daughter, Sandra McCoy (Allan) of Gastonia (formerly of Charlotte) and son, John S. Dellinger, Jr. (Susan) of Raleigh; grandchildren, Mari Alice Goudreau (Derek), Christy Baucom (Jason), David McCoy (Jessica), and Adrian Dellinger (Kayla); great-grandchildren, Brayden Baucom, Aubrey Baucom, Alexa Goudreau, Noah Goudreau, Samuel McCoy, Caleb McCoy, Hannah McCoy, Abigail McCoy, Jackson Dellinger, Georgia Dellinger, and Nedra Dellinger; sister, Jean Messick; many nieces, nephews, and cousins; and a host of long-time friends and neighbors. Sam will be laid to rest beside his wife at Elmwood Cemetery in Charlotte, North Carolina. The memorial service will be at a later date in the future. James Funeral Home, of Huntersville, is serving the family.

John Samuel Dellinger, 100, beloved husband, father, and PaPa, died peacefully on Friday, January 15, 2021, after a brief illness. He was born on July 31, 1920, at St. Peter's Hospital. A proudly independent native son, he was descended from... View Obituary & Service Information

The family of John "Sam" Samuel Dellinger created this Life Tributes page to make it easy to share your memories.

Send flowers to the Dellinger family.