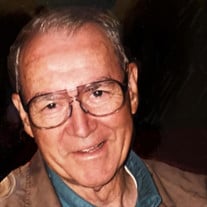 John Halbert Moore, 97, of Charlotte died February 3, 2022. He was a beloved husband, father, grandfather, great-grandfather, WWII veteran, mentor, and friend. John Moore would have told you that he lived an unexceptional life. Nothing could... View Obituary & Service Information

The family of John Moore created this Life Tributes page to make it easy to share your memories.

Send flowers to the Moore family.