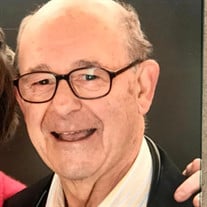 Joseph Anthony DiLallo, was born in Elmira, NY to Consiglio (John) and Cecelia DiLallo on December 12, 1933. He peacefully passed away on June 25 in Huntersville, NC. Joe grew up in a close-knit Italian family. He was the only child of adoring parents. His mother was a caring and energetic force; his father was a hard-working, old school cobbler. He grew up with many loving aunts, uncles and cousins. Much of his childhood was spent watching minor league baseball at the iconic Dunn Field. In addition to being a talented baseball player, he excelled in football, basketball and bowling. His first job was at the bowling alley across the street from his home, where he set up pins at the age of twelve. He later picked up tennis, which became his favorite sport for the rest of his life. He was a fixture at the Short Hills Racquet Club and the Summit Tennis Club. He won countless trophies and tournaments. From Elmira, Joe went on to the University of Notre Dame, which he loved dearly. He returned countless times to his alma mater with his family in tow to watch ND football games and catch up with his Notre Dame buddies. He subsequently attended Loyola University’s Stritch School of Medicine in Chicago, which he often said was one of his best decisions ever. It was at Loyola that he met his wife Lilita (Lily) of 59 years. After medical school he proudly served his country as a physician in the United States Navy. Joe was a wonderful father and a loving husband. He was a positive, happy force for his family. He was the embodiment of kindness, good humor and a little mischief! He devoted a great deal of himself to the career he loved and instilled a strong work ethic in all of his children. He particularly loved family vacations and taking his children to Yankee games and the US Open to watch tennis every year. Joe was a caring, brilliant and empathetic doctor who loved his patients. The house was filled with gifts every year at Christmastime from his patients who loved him back. He made house calls and volunteered at free clinics. Until just a year ago, he contributed his time and energy at a school for disadvantaged youth. He was great with people and making everyone feel special, greeting everyone with a spring in his step and an infectious grin. He retired at the young old age of 85. He will be greatly missed by everyone who had the pleasure off knowing him. He is survived by his loving wife Lilita DiLallo, and his six children: Annie Newell, Laura Watson (Wade), Lisa Clark, (Bruce DeCesare), Johnny DiLallo, Eva Nordstrom (Brian) and Joey DiLallo (Rachel). Joseph is survived by 14 grandchildren: Alisa, Lauren, Julie, Andrew, Matthew, Christina, Elizabeth, Whitney, Damon, Liam, Lily, Heather, Zander, Dax and his great granddaughter Glory. He was predeceased by his much loved son-in-law, Tommy Clark on 9/11. He had many more cherished nieces, nephews and cousins. Additionally, Joe leaves behind many close friends all of whom he treasured. A private funeral will be held for the immediate family only, due to current Covid restrictions. A celebration of his life will be held at a later date, conditions permitting. In lieu of flowers, donations in Joe’s memory can be sent to St. Jude Children’s Research Hospital.

Joseph Anthony DiLallo, was born in Elmira, NY to Consiglio (John) and Cecelia DiLallo on December 12, 1933. He peacefully passed away on June 25 in Huntersville, NC. Joe grew up in a close-knit Italian family. He was the only child of adoring... View Obituary & Service Information

The family of Dr. Joseph Anthony DiLallo created this Life Tributes page to make it easy to share your memories.

Customized sympathy cards. Mailed for you.