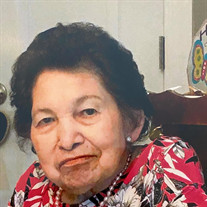 Juliana Moreira, 79 of Cornelius passed away peacefully surrounded by her family on November 18, 2020 at her home. She was born on March 19, 1941 in Nicaragua to the late Julio and Angelica Moreira. Juliana Moreira, known to her friends and family as “Julianita” or “Julie” was born in San Rafael, Nicaragua. She was the youngest of 7 children. While serving as a Red Cross nurse in Nicaragua in the mid 1960’s, she was given the opportunity to come to the United States as a nanny. A few years later she moved to Rochester, NY to reunite with one of her sisters living there and met Felix O’fray. They married in 1969, and brought Julie’s other children, Ricardo, Francisco and Coralia to the U.S. to join them along with their baby brother, Paul. Julie retired from Eastman Kodak after 30 years of service. She enjoyed traveling and throughout her life, Julie enjoyed flower arranging, with both live and silk flowers. As her arts and crafts ability grew, her co-workers at Eastman Kodak were known to purchase many of her designed items. After her retirement, Julie moved to Charlotte, North Carolina in 2007 where she enjoyed being near her daughter. Julie’s spiritual life came alive in 1971 when she accepted Jesus Christ as her Lord and Savior. From that day, she considered raising her children to know God, love God and serve God her greatest priority. When Julie moved to Charlotte, NC, Grace Covenant became her home church. Known for her kindness, she often sacrificed to help others who were struggling. The doors to her home were always open to people. No one that entered Julie’s home left hungry. Preparing meals was her language of love. Julie may have been short in stature, however, she lived with a BIG heart. Survivors include: 2 brothers, Francisco and Jose, 2 sisters, Christina and Marina, 4 children, Ricardo (Esther) Moreira, Francisco (Tatiana) Moreira, Coralia (David) Lorusso, Paul (Jennifer) Moreira, 4 grandchildren (Erica, Lisa Marie, Samuel and Eythan) and 4 great-grandchildren (Joelis, Ivelisse, Ricardo Fabian, and Aria). In lieu of flowers, memorials may be sent to Grace Covenant Church, 17301 Statesville Road, Cornelius, NC 28031. Contributions should be made via check with the memo saying: Nicaragua Relief Fund. A funeral service will be held at 1:00 pm Monday, November 23 at Grace Covenant Church with reception/visitation 12-1:00 pm prior at the church. Burial will follow at Northlake Memorial Gardens. James Funeral Home of Huntersville is serving the family.

Juliana Moreira, 79 of Cornelius passed away peacefully surrounded by her family on November 18, 2020 at her home. She was born on March 19, 1941 in Nicaragua to the late Julio and Angelica Moreira. Juliana Moreira, known to her friends and... View Obituary & Service Information

The family of Juliana Moreira created this Life Tributes page to make it easy to share your memories.

Send flowers to the Moreira family.