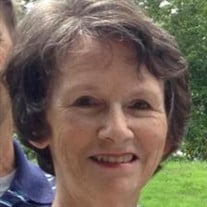 Kathy Kirby Harmer, of Huntersville, peacefully passed away on October 22, 2021 at the Levine Dickson Hospice House in Huntersville, NC. Kathy was the daughter of John W. and Francis Carr Kirby of Charlotte. She was born in Atlanta, Georgia and moved to Charlotte in the early 1960’s. She attended South Mecklenburg High School and graduated in 1964. While in school she was a member of the Girl Scouts and was the Assistant Subscription Manager for the high school year book Somecka. In 1964 she became the Business Manager for Somecka and continued being active as members of both the Spanish Honor Society and Student Council. She then attended Elon College and after two years earned an Associate’s degree and married Mike Harmer in 1966. They moved to Tampa, Florida where Mike landed a position with Del Monte Food Corporation. Kathy took a job in the stock market business and they lived in Tampa for one year. Mike was then transferred to Rochelle, Illinois with Del Monte Corporation where they lived for about six months. Mike’s work transferred them to Memphis, Tennessee where Carrene Marie Harmer was born and lived for a year; and then transferred again to Topeka, Kansas where Michael Tate Harmer was born. After about a year in Topeka they were transferred back to Rochelle, Illinois where Mike continued to work for Del Monte Corporation. After five years they decided to move back to Charlotte, North Carolina where Kathy took a job working for Claude Wells Insurance Company, which later became Cameron Harris Insurance Agency. She worked there part-time raising two children, while Mike traveled on the road. She retired after seventeen years in the insurance industry as a Certified Insurance Counselor. Kathy lived most of the rest of her life in Charlotte where she was a member at Grace United Methodist Church, Matthews Methodist Church and finally Davidson United Methodist Church. She was active in the church and spent time with the DUMC Trek Club members. She was an avid golfer, mother, homemaker, adored her dogs and loved to spend time in their mountain home in Fancy Gap, Virginia. She also enjoyed playing the mandolin; which she learned from her sister and brother-in-law. She loved all her friends and especially the recent friends she made at the Rock Steady Boxing class through Huntersville Family Fitness and Aquatic Center as well as her coaches Philip Ritchy and Dave Cusick. She is survived by her husband Mike, daughter Carrie and son Tate; as well as her beloved Bearded Collie Kelly, Sisters Bonnie Wilkes of Walnut Cove, North Carolina and Harryette Ahlstrom of Davidsonville, Maryland and Sister-in-law Anita Kirby of Charlotte, and a host of good friends and neighbors. A special thank you to all the doctors and nurses and caring staff through Levine Dickson Hospice House who cared for her during her peaceful journey. A service to celebrate her life will be held at 2 PM Wednesday, October 27 at Davidson U.M.C. with visitation to follow. Burial will be private at Forest Lawn West. James Funeral Home of Huntersville is serving the family.

Kathy Kirby Harmer, of Huntersville, peacefully passed away on October 22, 2021 at the Levine Dickson Hospice House in Huntersville, NC. Kathy was the daughter of John W. and Francis Carr Kirby of Charlotte. She was born in Atlanta, Georgia... View Obituary & Service Information

The family of Kathy Harmer created this Life Tributes page to make it easy to share your memories.

Kathy Kirby Harmer, of Huntersville, peacefully passed away on...

Send flowers to the Harmer family.